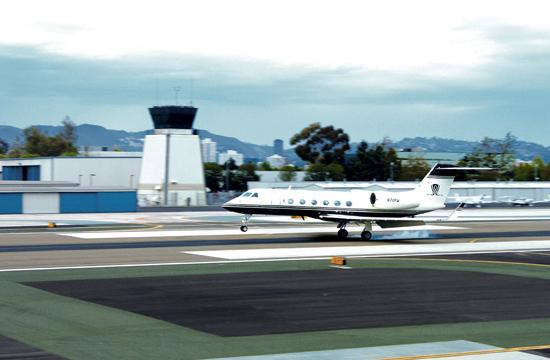 As residents and city leaders alike grapple with deciding the ultimate future for Santa Monica Airport (SMO), there is a maze of information to navigate before anyone can determine whether or not the aviation facility should remain open as is, be abridged into a smaller operation, or shut down completely.

Some interesting facts about SMO: the airport houses a total of 422 aircraft, including 19 jets, 22 helicopters, and 381 propeller planes.

Conversely, in 1984 total annual jet traffic was only about 1,000 according to an air monitoring study of SMO by the South Coast Air Quality Management District (SCAQMD).

According to statistics provided by City Hall, about 61 percent of flights in 2010 were “transient flights,” meaning aircraft that came from or depart to other airports. The other 39 percent were local flights, which the City defines as “those where an aircraft stayed within the Airport’s controlled airspace, which is generally within five nautical miles of the airport or within the airport traffic pattern.”

Facts aside, much of the debate of how best to move forward with SMO centers around several key issues, including the facility’s ownership and concerns about health and safety.

With respect to ownership, the City Attorney’s office said Santa Monica owns SMO, yet there are certain legal constraints as to the powers City Hall actually has with respect to its ownership rights.

Contractually speaking, there are three elements essentially governing the City’s ownership of SMO: the 1948 Instrument of Transfer; the 1984 Agreement with the Federal Aviation Administration (FAA); and, several grant assurances that have sparked a debate between City Hall and the FAA as to whether Santa Monica’s obligations at SMO end in 2015 or 2023.

Adding to the complexity of legal documents and arguments is Resolution 6296 adopted by the 1981 City Council, which called for the closure of the airport “as soon as possible.”

In light of the various agreements in play, one of City Hall’s concerns is whether the FAA can dictate how Santa Monica makes use of SMO, a concern that may require litigation to resolve.

Mayor Pro Tem Gleam Davis pointed out that it was Resolution 6296 that led to litigation with the FAA and, ultimately, the 1984 Agreement.

“It was the 1981 resolution of the Council to close the airport that caused the litigation that led to the 1984 settlement agreement. I do not want the City to be in that position again where it is forced to negotiate an agreement that is not in the best interest of the City simply because it provoked litigation,” Davis told The Mirror. “We want to make sure that we do not take action that could lead to litigation that might freeze the airport status quo until the litigation is resolved (which could take years well beyond 2015) or lead to an adverse legal decision that affects our legal rights to close the airport.”

The FAA makes its assertions based upon its interpretations of the 1948 Instrument of Transfer and grant assurances.

Specifically, the 1948 Instrument of Transfer requires a portion of SMO to be operated as a public airport in perpetuity.

“The FAA believes that the Instrument of Transfer effectively prohibits the City from closing the Airport; the City believes that it does not,” City Attorney Marsha Jones Moutrie stated in an October 2011 presentation to council members during an SMO hearing.

City Hall also challenges the interpretation of grant assurances. As Santa Monica accepted grant money from the FAA for airport improvements and maintenance, so came certain conditions. One of those conditions required City Hall to operate SMO without “unjust discrimination” and/or “exclusive rights.”

According to City Hall, the conditions attached to the last set of FAA grant funds it received would expire before 2015; however, the FAA contends the final year of the grant assurance is 2023, which, it believe, requires Santa Monica to operate SMO until at least 2023.

One thing is for sure: according to the City Attorney’s office, the leases for the six flight schools will terminate in 2015. (Flight schools will be discussed at greater detail in the next segment of this series).

Beyond the legalese, there are other key debates to be had.

Some have contended one way to limit jet use at SMO would be to eliminate 2,000 feet of runway. The airport currently has approximately 5,000 feet of runway space. A portion of the runway – about 2,000 feet – is attached to “City-owned parcel,” which was conveyed to Santa Monica in 1949 for general aviation use. The remaining 3,000-some feet is attached to the 1948 Instrument of Transfer, or the portion of the airport to be operated in perpetuity.

Safety has been another major discussion item.

Since 1989, there have been at least 11 reported collisions involving planes flying within SMO’s controlled airspace. Of those collisions, six of them occurred since January 2008, including a Cessna 210 that crashed into a West Los Angeles neighborhood last month on Aug. 12 after taking off from SMO.

“Many residents fear that so many aircraft at low altitudes over houses and schools create an unacceptable safety hazard, where we’ve just been mostly lucky so far,” Council member Kevin McKeown told The Mirror.

Conversely, Santa Monica resident and pilot Mark Smith said there are several safety measures in place to minimize potential hazards as much as possible.

“There’s an amazing amount of effort that goes into preventing accidents, more so than cars,” Smith told The Mirror.

Another hot discussion item is health.

Prior to that, the SCAQD released an airport air monitoring study of SMO and Van Nuys Airport. That study in 2010 concluded even though it did not exceed federal or state levels, there were elevated levels of lead near SMO’s runway sites and in the surrounding neighborhoods.

“When I suggested we have the Air Quality Management Board sample airport-area air before, during, and after a short temporary closure of the runway two years ago, we gained unassailable proof that air pollution, including particularly dangerous ultra-fine particles, is directly attributable to airport flights,” McKeown said.

On the other hand, Smith said airplanes would continue to become cleaner and safer as modern technology improves.

Speaking of technology, the City of Santa Monica recently announced it would be hosting a free seminar Sept. 22 on aircraft silencer technology. To be held at the Museum of Flying, the morning seminar seeks to discuss “new and emerging noise reduction technologies.”

There have also been questions about how much SMO costs City Hall.

“The City’s own operations at the airport are under a separate budget from our general fund, and the airport just breaks even,” McKeown said.

Of course, SMO does have a practical use.

“Our economic study showed that the aeronautics-oriented businesses, and their benefit to the local economy, could be replaced if the airport were closed and the land converted to other uses,” McKeown said. ” Having a runway, no longer overused by executive jets and flight schools, could be a benefit to Santa Monica in case of disaster, when emergency supplies and medical flights could land here.”

Just the same, Davis told The Mirror while change at SMO may be necessary, effectuating the change that maintains the airport as a contributing asset to the City requires extensive deliberation.

“It is part of our history. Unfortunately, as currently configured and used, airport operations have a negative impact on the community,” Davis said. “If we cannot change its current operation and use so that it can be a good neighbor while preserving its use as a recreational (as opposed to a business) airport and a potential asset in case of a natural or other disaster, the city gains nothing from keeping it open.”

As The Mirror’s series on SMO continues throughout September, there will be further elaboration on the many issues concerning the airport and bring in more perspectives of local residents, pilots, flight schools, elected officials, candidates for city council, and the FAA. Please continue to follow this special report.