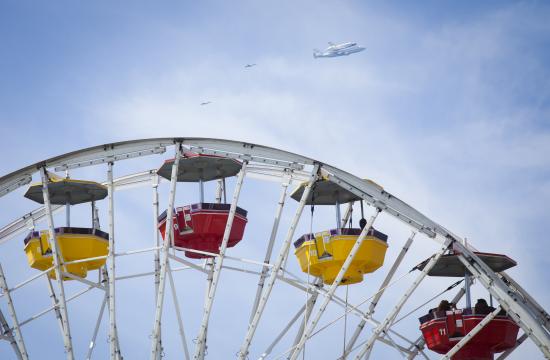 Space Shuttle Endeavour thrilled people on the ground in Santa Monica as it flew over the city by the sea just before noon today flanked by two T-38 Talon jets.

Before its landing, it flew over the Getty Center, Hollywood Sign, Universal Studios Hollywood, the Rose Bowl, and Jet Propulsion Laboratory in Pasadena before flying to Disneyland and back to Long Beach before landing at LAX.

Endeavour arrived into California on Thursday and spent the night at Edwards Air Force Base. It departed the base this morning at 8:17 a.m. and headed first to Sacramento and San Francisco before flying south to Los Angeles.

Nichelle Nichols, who played Lt. Uhura on the original Star Trek series, recruited astronaut candidates for NASA from the late 1970s to the late 1980s.

She spoke just after 1 p.m. at the arrival ceremony at LAX.

“This is especially meaningful to me and my work with NASA over the years supporting their efforts to increase diversity in the space program. I had the privilege of recruiting the first women and minority astronauts for the space program.”

Michael “Mike” Fincke was on board Endeavour’s last mission on STS-134 from May 11 to June 1 last year as a mission specialist.

He told Fox11 News this morning “it’s an amazing day.”

“The whole city is unified with this electric purpose to welcome Endeavour home and I’m so thrilled to be part of it and I’m overwhelmed by the hospitality,” Fincke said.

He said one of his most amazing sights he’s ever had was seeing earth from Endeavour.

“I’m a planetary scientist and I like looking at other planets, until I saw earth from space and I fell in love,” he said. “We have the most beautiful planet, so many different colors, so many different shapes, it’s just amazing.”

He talked about the experience of living on board the space shuttle.

“The most important, amazing thing when you’re in space is that you can fly,” he said. “We all dream about being Superman or Iron Man or something like that, well you can actually be that way in space. You feel normal, but you can fly everywhere and it doesn’t get old.”

Cranes will lift Endeavour off the Boeing 747 later today and the shuttle will be put on a special carrying device so it can weave the streets of LA to the California Science Center on Oct. 12 and 13.