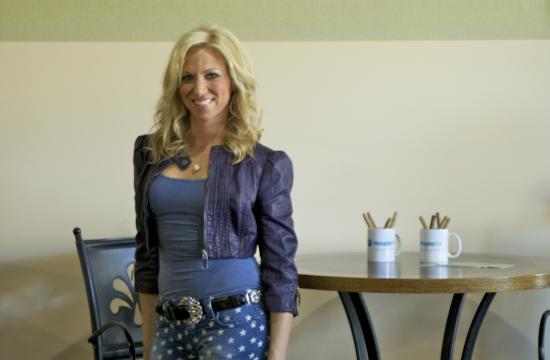 Pop singer-songwriter Debbie Gibson made a public appearance in Santa Monica on Thursday to talk about her new relationship with HooplaHa, and also share her passion for philanthropy and genuine desire for giving back.

The event was held at the Funnel Mill Cafe at 930 Broadway.

Gibson was recently named the new HooplaHa Brand Ambassador. HooplaHa.com is an innovative website delivering only good news from all over the U.S., and throughout the world.

She will appear in uplifting HooplaHa video news stories several times a month as a way to remind people of all the good in the world.

In 1988, Gibson was pronounced the youngest artist to write, produce, and perform a number one single on the Billboard Hot 100, with her song “Foolish Beat.”

More recently, she reached the Billboard Adult Contemporary chart as high as #24 during 2006 in a duet with Jordan Knight titled “Say Goodbye.”

In 2010, the album Ms. Vocalist, from Sony Japan was Top 10 on the Japanese Billboard chart and the first single from the album, “I Love You,” hit number.

Gibson’s first video for HooplaHaposted can be viewed here: http://www.hooplaha.com/choices-in-the-studio-with-debbie-gibson-and-leilah-ali.