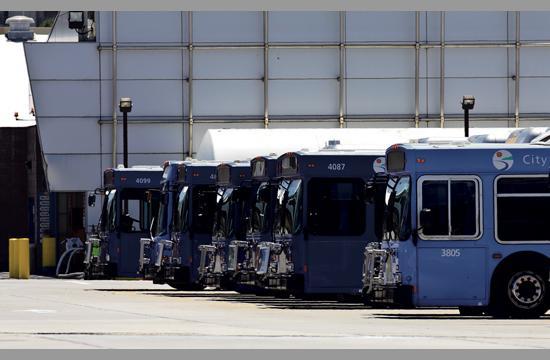 The deal is part of a three-year contract that will now be worth $971,995. BBB’s Operations Building is located at 1660 Seventh Street and underwent an “overall rehabilitation” in 2011.

City staff said the furniture to be purchased is “cost-effective, easily ordered from local suppliers, and made of recycled and low-emission materials that are compliant with commonly accepted ‘cradle to cradle’ standards.”

“Every three months all buses would be inspected, repaired and a report of findings submitted,” City staff said. “Each vehicle would have every camera inspected for clarity and functionality, the electronic module would be inspected for loose connections, and the configuration and firmware would be checked and updated as needed to ensure proper operation.”

Also approved was a three-year contract, worth as much as $955,080, awarded to Santa Monica-based Harder Brake Lathe and Electric for providing “preventive maintenance inspection service and repair of the 100,000 plus square feet of Big Blue Bus facilities”

City staff said such maintenance “is necessary to keep the buildings and grounds safe, operating to original equipment manufacturer recommendations and specifications, and to ensure compliance with federal, state and City codes and regulations.”

Onsite facilities include the Operations Building, the Fuel and Wash Facility, and the Transit Maintenance Facility as well as parking lots, underground facilities, and general grounds such as landscaping and utilities. Located offsite are: a fuel dispensary at Fifth and Olympic, a BBB store, and the transit mall. Each of these facilities will be maintained as part of the contract.

Beyond the facilities, also to be maintained are the heating and air conditioning units, plumbing, the methane detection system, fuel systems, electrical equipment, and in-ground hoists.

“A minimum of three journeyman-level facility technicians are needed to adequately perform the inspections and repairs on building HVAC, plumbing and electrical systems,” City staff said. “Although sections of BBB facilities have undergone refurbishment and repair, long-term planning of preventive maintenance has not been conducted consistently on site. In addition, the BBB facilities maintenance staffing level is not sufficient to perform maintenance services.”

Similar to the surveillance system contract, the preventive maintenance agreement is also for one-year with two one-year options. The first year of the contract is worth $300,000. In year two, the fee would increase to $318,000. The final year, if renewed, would be valued at $337,080.

Council member Terry O’Day was not present at the Aug. 28 meeting.