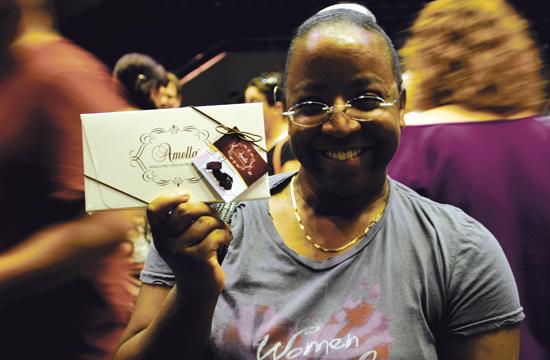 Held in Pasadena for the first five years, the L.A. Chocolate Salon moved to Santa Monica this year in order to broaden the experience to residents of the Los Angeles metro area.

Organizer A.K. Crump of TasteTV believed the event had a different effect in Santa Monica due to the new audience and new participants.

“(Having the event in Santa Monica) is basically like a re-launch of the brand,” Crump said.

Although the majority of the participants were from California, there were other participants that came from Oregon, Utah, Ecuador, and other out of-state places creating an international atmosphere.

Crump believes that the L.A. Chocolate Salon is unique.

One of the Santa Monica-based participants was The Gourmandise School of Sweet and Savories, a hands-on culinary school.

Ruth Kennison, a chocolatier and pastry chef at the school, said the purpose of attending was to educate people about the contents of chocolate and what it really should contain.

She also had a chocolate demonstration during the event where she taught a large audience how to make chocolate from its early stages as a pod to the final product.

Event visitors were enthralled to be able to taste the wide variety of chocolates and confections.

Shannon Lyndolph, a Hollywood resident and a chocolate lover, came to the event in order to taste the variety of chocolates and to learn about them from professional chocolate makers.

Additionally, a portion of the salon was dedicated to fragrances.

Crump said that it was the second time fragrances have formed a part of the event because there are several individuals who appreciate the art that goes into making fragrances as well as the art of chocolate.

Despite the overwhelming success in Pasadena, The L.A. Chocolate Salon will most likely stay in Santa Monica in forthcoming years.