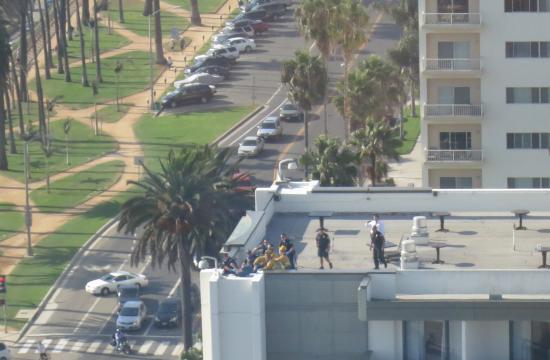 Santa Monica police and firefighters apprehended a man at 4 p.m. Tuesday on top of the Fairmont Miramar Hotel at 101 Wilshire Boulevard who was threatening to jump off the hotel roof for more than an hour.

Ocean Avenue was shut down from California to Wilshire while police negotiators were on top of the building trying to talk the man down.

Lewis said the man was intoxicated and had recently had a break-up with his partner.

“We didn’t charge him with any crimes because he has a medical condition, therefore I can’t release too much information,” Lewis said.

Lewis said the man was from the Los Angeles area.

“He was intoxicated and he fell asleep, he may have passed out on the ledge,” Lewis said. “Officers and firefighters proceeded to grab him and move him away from the edge.”

A spokeswoman for the Fairmont issued the following statement when asked for comment about the incident.

“The safety and welfare of our guests and colleagues at the Fairmont Miramar Hotel & Bungalows is paramount,” the spokeswoman said. “Earlier today we learned of a guest that had accessed a restricted area of the hotel, city officials were immediately notified.”