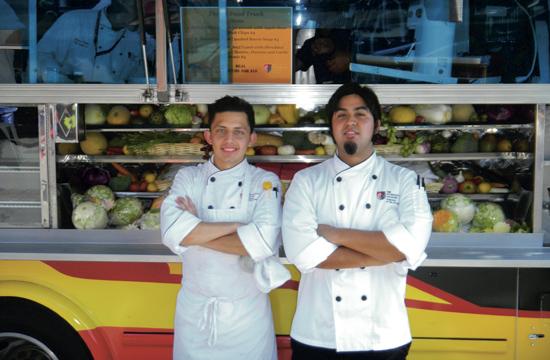 In a playful but competitive “battle,” a pair of Santa Monica culinary students challenged LA food truck India Jones Chow Truck and won on Saturday outside their Ocean Park Boulevard campus as part of a Food Truck Tour Challenge.

Student chefs Armando Garcia and Seiji Suenaga, of The International Culinary School at The Art Institute of California – Los Angeles, a campus of Argosy University, used their school’s own food truck in the friendly competition to take on India Jones Chow Truck, which is known around greater Los Angeles for serving up authentic Indian street food.

The victory was part of the Art Institute’s Food Truck Tour that has been bringing the excitement of Food Network’s The Great Food Truck Race-inspired cooking competitions to communities in Inland Empire, Los Angeles, Orange County, and San Diego.

It is the Art Institute’s second victory. The first battle was won earlier in the week on Wednesday, Sept. 5 with the Inland Empire campus’ student team beating the Truck Norris truck.

In each battle, both food trucks had to create a dish that included a mystery ingredient that was revealed only when the competition began. On Saturday, the sweet fuzzy kiwi fruit was the mystery item.

Suenaga and Garcia, both aged 20, had three other students assist them in the road to victory in this friendly food fight.

Their winning dish was a sweet yet slightly spicy kiwi and roasted jalapeno sorbet, topped with a kiwi pico de gallo.

When the secret ingredient was announced, Garcia said they quickly came up with an idea.

“We talked about it, we wanted to do something modern so we used modern ingredients for the cuisine, like dry ice to freeze a sorbet, and make it simple but tasty and used sweet and sour ingredients,” Garcia said.

“India’s food tasted awesome but the deciding factor was the sorbet,” Brockman said. “It wasn’t just the flavor, there was emotion attached, you could feel and taste the love.”

Chef Christophe Bernard, the Art Institute’s academic chair for culinary arts, was not surprised by his student team’s victory.

“We are on the cutting edge, and we are very aware of food trends especially in LA,” Bernard said. “Making sorbet with dry ice is unique in a food truck, we are breaking ground with what can be done in a truck.”