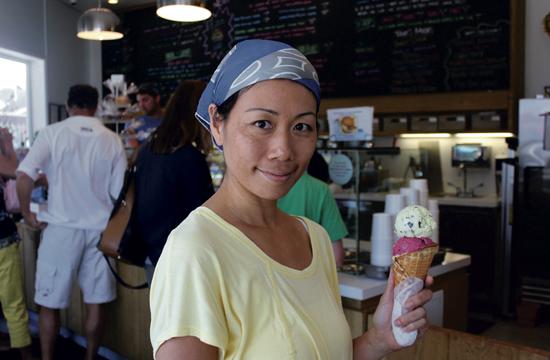 Each lick or spoonful of ice cream at Sweet Rose Creamery features only the freshest fruits and vegetables hand selected from the Santa Monica Farmers Markets.

Located at Brentwood Country Mart at 225 26th Street, the shop is headed by Managing Partner Shiho Yoshikawa, which is part of the restaurant group owned by Josh Loeb and Zoe Nathan.

Each week she picks seasonal fruits, vegetables, and herbs to mix with Clover Organic Farms dairy, organic eggs, and sugar to make her small batches of homemade icecream.

This summer she has been featuring a sweet corn ice cream that’s been a hit with locals.

“What I usually do is remove the husks, take the corn off the cob, and heat that up with milk, sugar, and cream and kind of cook them, but I’m careful not to overcook the mixture to keep that sweet taste of the corn,” Yoshikawa said. “I then puree the whole thing and mix it with yogurt. We usually make about 10 liters at a time. It’s a small batch.”

She said apples, pears, and grapes are now in season and customers can already see them incorporated into her menu.

“If you have a scoop of ice cream and it doesn’t really taste like what it’s advertised, it’s really disappointing to me,” she said. “I think the experience needs to have a wow factor, like, ‘This peach ice cream tastes exactly like a peach, which is just what I wanted to taste.’”

In terms of vegetables she plans to use soon, she said pumpkins, squash, and sweet potatoes were also coming into season.

“What inspires me the most is when I go to the farmers market and I sample the produce,” she said. “When it’s bright looking and amazing tasting, that’s what excites me. I try and have that bigger impact when I’m picking flavors and I’m always thinking about what I can pair things with and what would be fun.”

Born and raised in Japan, she left her home country at age 16 on her own to study installation art at the California College of the Arts.

After transferring to a now-defunct nearby institute, Yoshikawa was frustrated by the fact that most of her classmates were Japanese exchange students, which made it difficult for her to learn English.

To solve this problem, she moved to Massachusetts to study at the Easthampton Art School, which is where she developed her artistic credo.

“My focus became about structuring the beauty of the moment and how that inspires you as a person,” she said. “It’s really important for you to find the beauty in everyday life.”

After art school, she returned to Japan to weather a brief “identity crisis,” as she puts it.

“I was constantly comparing Japanese and American culture, and where I was between the two,” she said.

After two years of working in a variety of fields in Japan, she decided she was ready to return to the U.S.

After taking culinary classes at City College of San Francisco and graduating from the San Francisco Baking Institute in 2003, she worked at the Bay Area’s acclaimed Tartine Bakery alongside Pastry Chef Zoe Nathan for the subsequent five years.

She went on to work in San Francisco as a baking instruction video contractor at her alma mater; a pastry cook at the Slanted Door, as well as bread consultant at the Commissary; and a frozen yogurt consultant at Miam Miam Lounge.

While consulting for Miam Miam in 2009, Nathan and Josh Loeb requested Yoshikawa’s assistance on recipe development for the opening of Huckleberry Café & Bakery in Santa Monica.

Then after helping a friend open up Sandbox bakery later that same year, Yoshikawa realized she wanted to try her hand at a business of her own. Initially, she flirted with the idea of opening an ice cream shop in Hawaii, where her husband was born.

But upon talking with Nathan and Loeb, it was a natural choice for her to head the dessert kitchen at Sweet Rose Creamery, which launched in 2010, bringing her years of experience along with her artist’s eye to create a boutique ice cream experience at the Santa Monica shop.