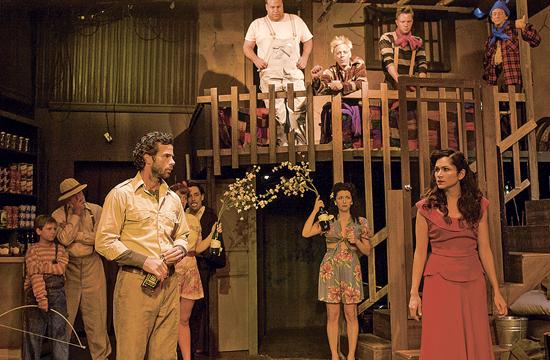 John Steinbeck’s 1937 novel, “Of Mice and Men” was based on a poem by Robert Burns which contained the famous quote: “The best laid schemes of mice and men / Often go awry,” and unfortunately this sentiment can aptly be applied to Robb Derringer and Matt McKenzie’s world premiere stage adaption of John Steinbeck’s sequel to “Cannery Row,” “Sweet Thursday,” a mélange of disjointed, rambling scenes which director Matt McKenzie could not turn into a satisfying evening of theatre making it a tedious train ride to nowhere.

The narrative is a long-winded mess including a couple of puzzling song and dance numbers thrown in to further muddy the proceedings. The only saving grace are a few excellent performances by several members of the very large, uneven cast who put forth a valiant effort but with the exception of a few, were unable to overcome poor writing and directing. A very talented Jeff Doucette, who acts as the narrator and Mack, one of the guys living in the Palace Flophouse, has a strong, professional stage presence and breathed some life into the dying proceedings.

Oh yes. There is a story and it revolves around the character of Doc, a marine biologist who after serving a stint in the war, is back at his lab experimenting with a variety of sea urchins. Doc needs a new microscope that costs $100 so the guys living in the flophouse conspire to do a fundraiser to raise the amount. Doc is a lead role and unfortunately Joe McGovern is not up that challenge.

Meanwhile, back at the Bear Flag Bordello lives Fauna, the madam with a heart of gold who treats her girls kindly and even teaches them good posture by having them walk with books on their heads as well as giving them lessons in proper table manners. Suzanne Ford is a fine actress who breathes believable life into her cardboard character and wears a stunning array of period costumes designed by Audrey Eisner. Now, enter sort of sweet Suzy, who shows up in town and applies for a “job” as one of Fauna’s ladies, and in short order she and Doc develop a “thing” for each other. She eventually leaves the bordello and takes up residence in a vault. Although she gave it a noble effort, Lela Loren’s acting didn’t get much beyond line readings.

That said, other performances worthy of mention were given by Ed Levey who played the saxophone and flute as the character Whitey 2, one of the residents of the flophouse who brought comic relief with his expressive, almost rubber face, and Ericjohn Scialo who gave a sensitive performance as the not very bright, innocent Hazel.

It’s only fair in closing this review that I once again quote the great John Steinbeck: “Unless a reviewer has the courage to give you unqualified praise, I say ignore the bastard.”