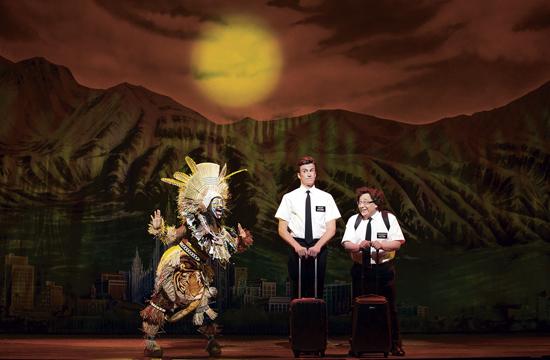 Rude, crude, and extremely offensive – that’s the goal “South Park” creators hoped for and achieved when writing the religious satire musical The Book of Mormon, the nine-time Tony Award winning production currently on stage at the Pantages Theatre in Hollywood.

The show starts with the song “Hello” with entertaining door-to-door attempts to convert people to Mormonism.

“Hello! Would you like to change religions?! I have a free book written by Jesus!” Elder Cunningham exclaims when it’s finally his turn.

“No, no, no, Elder Cunningham!” a voice billows from above stage. “That’s not how we do it! You’re making things up again! Just stick to the approved dialogue. Elders, show him!”

The elders break out into song: “You’re gonna die someday! But if you read this book you’ll see that there’s another way. Spend eternity with friends and family. We can fully guarantee you that this book will change your life!”

After the opening scene, the classmates are gathered at the LDS Church Missionary Training Center in Salt Lake City, Utah where they are excited to finish their training and start their two-year missions – “the most important time of Mormon kid’s life is his mission,” they sing.

In the song “Two by Two,” there is plenty of singing and dancing as classmates are paired up and learn they are going to wonderful places like Norway, France, and Japan.

But when Elders Cunningham and Price hear they are a pair and headed to Uganda, the devout and handsome Price isn’t as excited as the insecure and overweight nerd Cunningham.

“Uganda! Cool! Where is that?!” Cunningham asks excitedly. “Africa!” the voice above stage booms. “Oh boy! Like the Lion King!” he responds.

When they arrive in a remote village, they are immediately robbed and meet warlord General Butt-F–king-Naked who is threatening the locals.

A local villager whisks the naïve missionaries away from danger and tells them about the poverty, famine, and AIDS in their country.

The pair remains unfazed as they meet their fellow missionaries stationed in the area and are shocked to learn none of them have converted a single African into the religion.

Elder Price is optimistic he can succeed where the others have failed. He breaks into a performance about LDS Church founder Joseph Smith in the song “All-American Prophet,” which turns into a song more about himself in front of the villagers.

“The prophet Joseph Smith died for what he believed in,” Price sings. “But his followers, they kept on heading west. And Brigham Young led them to paradise. A sparkling land in Utah called… Salt Lake City! And there the Mormons multiplied, and made big Mormon families. Generation to generation until finally… they made me. And now it’s my job, to lead you where those early settlers were led long ago!”

After the villagers show disinterest to Price’s enthusiastic song and dance, the General returns and announces all females in the village will be circumcised by week’s end as he fears all of the clitorises will power up and destroy him.

After a male villager protests, the General shoots him to death without warning with blood splatter covering Elder Price.

Meanwhile at mission headquarters, panic begins to spread as the missionaries learn the Mission President has planned to visit them for an update on their conversions.

It is at this time that reality begins to sink in for Elder Price that not even he can be successful in converting Africans to Mormonism and requests a transfer to Orlando and dumps Cunningham as a partner, appearing to take control of his life comparing his actions to Jesus in the song “Man Up” to round out the first of the show’s two acts.

“What did Jesus do when they put nails in his hands?” he sings. “Did he scream like a girl? Or did he take it like a man? When someone had to die to save us from our sins, Jesus said ‘I’ll do it!’ and he took it on the chin!”

After intermission, the show returns to the village where Nabulungi (Samantha Marie Ware) has secured a gathering for Elder Cunningham to make his pitch to the villagers, but they quickly lose interest.

As they start to get up to leave, Cunningham does what he does best to keep their attention: lie. In the song “Making Things Up Again,” he tells villagers they can cure their AIDS by having sex with a frog and if they join the church that this will take them to paradise.

Meanwhile, Price thinks he is back on American soil in Orlando, but he soon realizes it’s just a dream that quickly turns into a nightmare with dancing cups of coffee (the church does not prohibit caffeine).

“Down, down to Satan’s realm!” the chorus chants as the spirit of Hitler appears. “See where you belong! There is nothing you can do! No escape from Spooky Mormon Hell Dream!”

When he wakes up, he finds he had just passed out at the bus stop and was still in Africa, so he decides to re-unite with Cunningham, who now has the entire village ready to be baptized following his extravagant claims what the church can do for them.

With his supposed success, Cunningham rejects Price’s plea to reunite as partners, which depresses Price so he goes and binges on coffee and reflects on the church’s broken promises in the song “Orlando.”

When the Mission President and two other Mormon leaders arrive at the Uganda headquarters, Price and Cunningham pretend to be best friends (rule 72 states that leaving your companion is forbidden) and are praised as heroes for converting so many Africans.

However, the glory and accolades quickly disappear when the villagers’ burst into the room to perform a pageant for the Mormon leaders to show them everything they had learned about their new religion.

“Joseph Smith f—ked the frog god gave him and his AIDS went away!” the Africans sung. “Then a great wizard named Maronai came down from the Starship Enterprise. Joseph Smith! Your village is s–t! You should lead the villagers to a new village.

“Take these f–king golden plates away. And on the plates were written the directions to a new land. Sal Tlay Ka Siti.”

The disgusted Mormon Leader storms off after the song and declares he will shut down their missionary after they so blatantly disgraced the church.

Nabalungi, confused at the reactions from the leaders after their proud performance, learns from Cunningham that all he did was told them lies.

Disgruntled, she returns to the villagers and tells them nothing was true, but to her shock, they all responded that they knew the stories were just metaphors and none of what he was saying was literally true.

Meanwhile, Price has a change of heart about leaving Uganda when the missionaries are set to depart, so he rallies all the Mormons and Ugandans to work together to make the remote village their paradise planet.

The show ends with the newly crowned Ugandan elders going door to door – mud hut to mud hut – to preach a sequel to the Book of Mormon called “The Book of Arnold.”

“Find paradise (Jesus Christ!) and no more war (hello, nice door),” they sing together. “You’ve read the book of Mormon did you know there’s more? (hi-ho). We swear this is not a scam (no ma’am). Have you heard the story of our prophet Arnold Cunningham?”

The Book of Mormon is the creation of Trey Parker, Robert Lopez, and Matt Stone. Parker and Stone are the four-time Emmy Award-winning creators of the animated series, “South Park.” Lopez is co-creator of the long-running hit musical comedy, “Avenue Q.”

The Book of Mormon hosts a day of show lottery making a limited number of tickets available at $32 each. Entries will be accepted at the box office beginning two and a half hours prior to each performance for up to two tickets.

Two hours before curtain, names will be drawn at random for a limited number of tickets that will be sold at the discounted price. Only one entry is allowed per person.

For tickets or more information, visit www.BookofMormonTheMusical.com or call 800.982.2787.