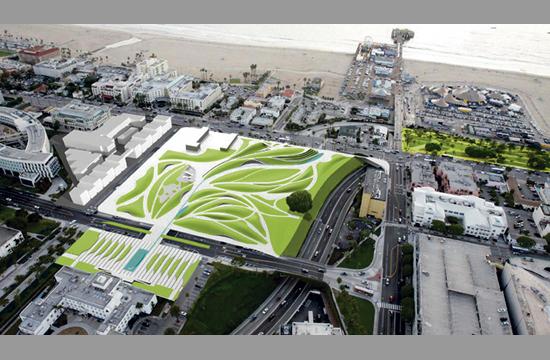 Navigating around Santa Monica Civic Center has become more difficult. Instead of picturesque views of the Pacific Ocean and the Santa Monica Pier, a chain link fence and orange-colored barriers will greet visitors looking away from City Hall as construction on the planned Town Square project begins.

The barrier and fence were erected Tuesday and the open space in front of Santa Monica’s City Hall will be updated with a new one-acre park that will feature pedestrian-friendly pathways and a streaming water design. With the commencement of Town Square construction, two Expo-related projects are now officially underway.

Already under construction, Palisades Garden Walk is a planned six-acre park bound by Main Street, Olympic Drive, and Ocean Avenue. Collectively, Town Square and Palisades Garden Walk will significantly alter the environs surrounding the Santa Monica Pier and the nearby Third Street Promenade. Both projects were envisioned to be welcoming public spaces in light of the Expo Line’s terminus a couple blocks away at Colorado and Fourth Street.

According to city staff, construction of Town Square will be spread over four phases. During this first phase currently underway, construction workers will demolish and grade the land. To be moved are City Hall’s bicycle lockers. Meanwhile, the flagpole at the foreground of City Hall’s grounds will be taken away until construction is complete.

Two temporary pedestrian walkways – on one Main Street and the other on Olympic Drive – will be built to replace a sidewalk in front of City Hall that will be out of commission.

The first phase will be complete by Spring 2013; phases two through four are scheduled to be completed a few months later.

Once complete, the park will have an “arroyo” themed design; “arroyo” is Spanish for “brook” or dry creek. As it is located in front of City Hall, Town Square is intended to serve as a gateway to Santa Monica – particularly for out-of-town Expo Line riders who would be arriving in town two blocks away – as well as an ideal location for civic gatherings.

In 2011, the Landmarks Commission declared the open space in front of City Hall – where Town Square will soon exist – an official landmark.

During a council meeting in June 2011, council members balked at the James Corner Field Operations design of Town Square and sent the plans back to staff for reconsideration.

In October 2011, both James Corner Field Operations and the Landmarks Commission were at odds over Town Square. The commission sought to have the new park retain a series of decorative bricks as part of City Hall’s new landscaping. James Corner, however, believed the bricks were outdated and not aesthetic to his design plan.

When council members considered both Palisades Garden Walk and Town Square as an agenda item last year, the estimated price tag for both projects collectively was $46.1 million.