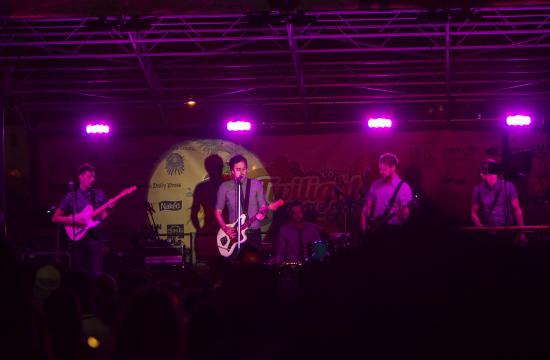 The 28th annual Twilight Concert Series came to a close on Thursday, Sept. 6. The flurry of onlookers left only standing room on the pier, and nearly outweighed the magnitude of the acts showcased.

Two California closers seemed fit for the finale of this year’s series, as Los Angeles’ Best Coast and Echo Park’s NO drew an estimated 30,000 people to the Pacific Coast. Reaching capacity, fire marshals had to restrict access to the dock around 9 p.m.

Gary Calamar of KCRW would turn the crowd’s volume up.

“If you think about it, why would you want to live anywhere else,” he said, provoking an uproar from eager fans.

A line of young Los Angelenos cried gleefully, pressing their bosoms against the metal barrier as they beckoned the first act to the stage.

The “post-hymnal anthemmatic NO,” – as they have been described – stole the show with a new age sort of indie barbershop quartet swagger.

“In a way it’s kind of a negative word, and we have sort of gave it a new context,” said lead vocalist Bradley Carter of their name. “We just like how it’s simple.”

A stylish Heineken-colored drum set backed up four frontmen; consisting of three guitars (at times four), and a keyboard – all aiding on vocals here and there.

But Carter steered his group, well prepared and focused on seizing the moment.

“This is the first time we have played on a stage so big,” he said with an accent hinting his New Zealand origins.

Carter aside, his mates seemed a bit reluctant to leave everything on the court, and appeared a bit nervous at the start of their set.

Yet after performing “Monday,” an ice-breaking chuckle between the guys seemed to loosen tensions.

NO’s mellow melodies, folk-like undertones, and range of peaks and depths confirmed it. These guys are a rock band on their way.

“What’s Your Name” and “Stay With Me” played with traditional British rock band ideals, and left the audience wanting more.

Having held their first show last November, an official album is still in the works. Thus far, an EP entitled “Don’t Worry, You’ll Be Here Forever” is available online at nomusic4.me.

A magnetism shot across the Pier as more and more folks arrived in the hour leading up to headliners Best Coast.

The four-man crew – three men, and one lady – entered through a shower of camera flashes and encouraging pats on the back.

And despite a sound malfunction at the start of their set, Best Coast beheld a veteran poise and calmness as if they were playing in their own garage.

Lead vocalist and guitarist Bethany Cosentino seemed determined to leave her mark. She stood in a salmon-colored summer dress, backed by a sturdy drummer who delivered an exemplary performance.

While people likely got what they came for, a tinge of disappointment coughed through the crowd as Cosentino’s voice sounded much different live.

“Last Year” off the band’s newest album “The Only Place” enthused front-row fans as they sang along.

“I want to dedicate this song to how great the summer of 2012 was,” Cosentino said before performing “Summer Mood.” “There’s just something about the summertime.”

Best Coast had performed “Do You Love Me Like You Used To” Wednesday night on the Conan O’Brian show, and Cosentino explained how they were filming a music video of the live performance. Disclaimers stood near the stage, declaring patrons’ consent to be filmed given they stood in the vicinity.

The slower tempos of “Dream My Life Away,” and an older song “Something In The Way” (not a Nirvana cover), exhibited Cosentino’s dimensions.

Best Coast produces quality within their parameters, and their first tune of a four-song encore displayed this fact eminently. “I Want To” contained grungy riffs, and throbbing instrumentals which ultimately won the crowd over.

Though Cosentino refused an interview, her gratitude was heard before a bow. “Thank you L.A., you’re the best place on earth,” she said. “We’re happy to be from here.”

Poignantly the last concert of the Twilight Series marked the end of a beautiful summer. Optimistically it reminded of Santa Monica’s communal and structural durability.

“We believe in creativity and the arts, and this series has endured now close to three decades,” said Mayor Richard Bloom. “You come out here, and hear music from every corner of the world during the course of this series. It’s a great venue, it really speaks of the summertime, and it speaks of the cultural scene here in Santa Monica.”