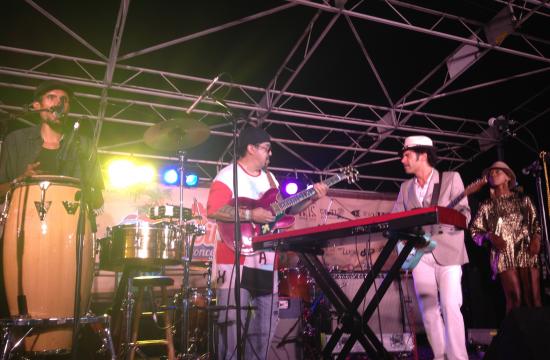 The moon was nearly full on Thursday as two funk bands coaxed a party out of Pier-goers. Patrons howled out familiar tunes, and became part of the revelry as their thumping feet echoed off the break.

First up to bat was the Westside’s own Gumbo Brothers. Seizing their moment, guitarist and lyricist Johan Stein engaged the crowd, “we ’bout to get funky y’all.”

And the party commenced. A fresh energized cover of James Brown’s “Get On Up” containing a memorable saxophone solo raised the thermostat.

Non-stop enthusiasm from all members of the ensemble was ratified by sweaty brows all around. When a buzzed onlooker pitched some golden beads at the stage, Stein casually caught the offering and flashed his raspy voice.

“Burn It Up” off their newest album “Funky Freedom,” and a cover of “Thank You” by Sly and The Family Stone encompassed the vibe of the crowd and boasted some fine guitar riffs.

Special guest Leo Nocentelli of The Meters joined the Bros. for their last song, rather a cover of his own “Hey Pocky A-Way.” A musical monster, Nocentelli held up a beautiful burgundy and gold electric guitar in gratitude before vowing another appearance with the headliners to follow.

The Gumbo Brothers host an annual Mardi Gras parade on the Venice boardwalk, and have a full schedule of Westside venues on the horizon.

Unfortunately the scheduled headliners, Hot 8 Brass Band were unable to be in attendance due to the “tropical storm” harassing their hometown of Louisiana.

However, “the funk knows no bad weather,” said Bagavagabonds’ Josh Thorpe. The Bagavagabonds helped produce this year’s Twilight Concert Series and design an exclusive T-shirt for the event.

In their place, with the utmost reverence was Brooklyn-based Pimps of Joytime.

“Our name puts out the message that we’re streetwise, but at the same time spreading love and good times,” said percussionist and co-vocalist Chauncey Yearwood. “We’re aware of how nefarious a true pimp is, and we don’t associate ourselves with that sort of thing. Even ‘jazz’ was a bad word at one point.”

Lead by Brian J, or “Mista J” as he goes by, The Pimps exploited the movement instilled by their predecessors and kept the party pounding.

Though the adjustment in schedule was a bit of a surprise for all, the band considers themselves “a touring machine.” Ready for the impromptu, Yearwood explained that “it’s always good to be able to adjust to the energy of the crowd. Music is alive and happening. You rehearse so that you can play tight, but also so that you are able to communicate with your band in a spontaneous way.”

The multi-cultural troupe opened with “My Gold,” all uniformed in funky-style attire. On the conga drums, Yearwood added some vocal accompaniment to the frontman during their title track “Janxta Funk,” and “San Francisco Bound.”

As promised, Nocentelli would grace the stage once again, diving into a dual guitar solo with Brian J during “Joytime Radio.” The two soulfully faced each other and simply jammed out, unperturbed by their task at hand.

“This is pretty unique – with the beach and people rockin’ like this. We don’t quite have anything like this on the East,” said Mista J in regards to our annual coast side series.

Dancing through an interlude before their finale of “Keep That Music Playin,’” the vocalist exhibited some raw boogie. Knocking the ball out the park; the group moved into a psychedelic funk jam, unloading a musical arsenal on the audience right up to the 10 p.m. hard curfew.

The Pimps’ most recent record to date “Janxta Funk” was released late last year. They are currently working on a new one, assured by Mista J. to be “bomb.”

Next week the final show of the summer presents our own Los Angeles-based indie acts NO, and Best Coast.