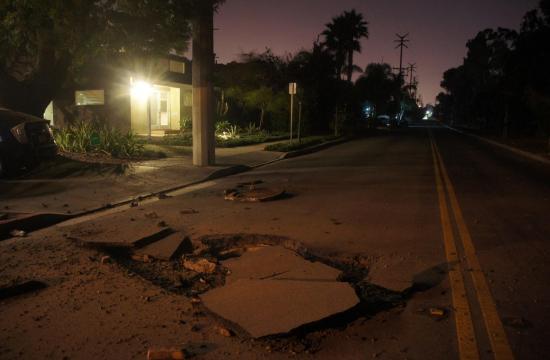 Santa Monica resident Dylan Kohler woke to the sound of a large explosion in the early morning hours of today on the 1700 block of Dewey Street.

At about 4:30 a.m., Kohler said the manhole cover to a Southern California Edison underground vault blew its top and “clanked down seconds after the explosion.”

“It must have rocketed up for a while,” Kohler said.

SMPD Sgt. Richard Lewis confirmed it was an underground transformer that blew just before 5 a.m.

“(Southern California Edison) are investigating why it happened, but there are no injuries and all electricity has be rerouted, so everyone’s power is back up and running,” Sgt. Lewis said.

“They will repair the street and the manhole cover,” he said. “It’ll be done within 24 hours.”

[Update Wednesday, Sept. 19 at 3:40 p.m.] A SCE spokesman said investigations of underground transformer failures can take anywhere between a few days and a few weeks.

The spokesman said any number of reasons could of caused the explosion from equipment failure to an animal interfering with the equipment.

The explosion came a day after residents in the Ocean Park and Sunset Park neighborhoods were left without power starting Monday at about 1:30 p.m.

SCE said a faulty underground cable was to blame, with some residents reporting power outages into the early morning hours of Tuesday.