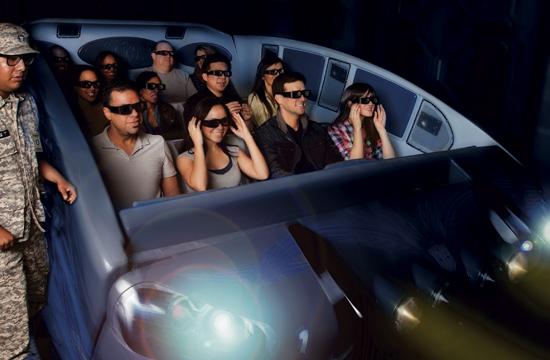 Since its opening in May, the new Transformers ride at Universal Studios Hollywood has been transporting thrill seekers into the action-packed robotic world of the hit Hollywood film franchise.

The story begins as soon as you step inside the sound stages that house the ride, which are the same sound stages previously home to the Special Effects and Backdraft attractions on the lower level of the theme park.

It starts with riders (aka recruits) entering the Nonbiological Extraterrestrial Species Treaty (N.E.S.T.) headquarters that’s been established by humans and their Autobot allies to safeguard earth from the evil Decepticons.

As recruits embark on the orientation queue, they encounter a brief welcome video from the facility’s Commanding Officer, General Morshower.

As the ride’s queue winds through N.E.S.T.’s underground enclave, the recruits continue to meet other military personnel and Autobots who address them from video monitors on their life-saving mission.

This series of introductory messages provides the recruits with vital intel necessary for the arduous task ahead: joining the Autobots, charged with protecting the last remaining All-Spark shard from the evil Decepticons who are on a relentless quest to steal it.

Along their orientation journey, recruits meet up with Autobot Evac, the stealth-transport robot assigned to protect human troops and the All-Spark, and guide it to safety should its security ever become compromised.

When the inevitable happens, and the All-Spark is stolen by the Decepticons and all havoc breaks loose and Evac is commanded to duty.

With emergency sirens blaring, warning signs flashing, and lock-down underway, Evac champions the new recruits to join him on an exciting ride to rescue the All-Spark and, in turn, save humanity from Megatron and his army of Decepticons.

Unlike The Simpsons ride on the upper level of the theme park, the 12-seat ride Evac vehicle twists and turns into different rooms where 14 different screens of varying sizes and shapes display 3D battle scenes between Optimus Prime, Megatron, Bumblebee, and other Transformers characters.

The ride vehicle pivots, rolls, pitches, undulates, and vibrates within a 360-degree rotation and uses a wide range of motions to simulate severe impact and physical interactions.

To maximize the experience, a series of unexpected special effects are triggered to occur in tandem with the 3D action sequences. A seamless integration of tactile effects – water, wind, heat, smoke, motion – enhance the media.

As 3D is typically rendered to accommodate flat, front projected screens, creating the original 3D media for the Transformers ride proved to be particularly challenging for even the creative team at ILM.

The media featured in the ride needed to be rendered to accommodate a series of non-traditional screens – front, rear projection, and compound curved – in exceptionally large sizes, while simultaneously seamlessly tracking with the guest viewing perspective on a roving ride vehicle timed to systematically enter and exit various action-packed scenes.

The objective, which ILM achieved successfully, was to create an environment that enabled guests to observe real world perspectives that fill their entire peripheral vision when looking at objects from varying angles and from different viewpoints.

The overall effect is ingenious: creating a photo-realistic world that effectively produces a setting with indistinguishable boundaries.

The 3D imagery blends perfectly with the attraction’s practical sets enabling guests to feel like active participants rather than passive observers.

For more information about “Transformers: The Ride–3D” and to purchase tickets to Universal Studios Hollywood, visit www.UniversalStudiosHollywood.com.