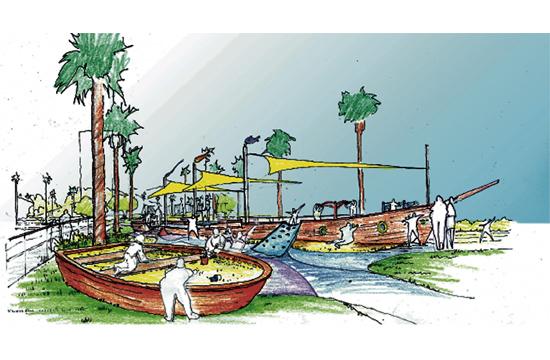 An ambitious plan to bring the first-ever universally accessible playground to Santa Monica Beach is expected to carry a bill of $1 million, as council members voted Tuesday to move forward with the negotiation and execution of a construction contract to build the project in front of the Sea Colony condominium complex.

The playground’s design calls for a 20,000-square-foot facility that is meant to give able-bodied and disabled youths the same access to a playground hailed from the Sea Colony complex. If realized, the universally accessible playground would be in an area on Barnard Way in between Sea Colony and Santa Monica Beach.

California-based company Micon Construction, Inc. was selected to receive the construction contract, which was valued at $998,481 (including a 10 percent contingency).

The base bid by Micon Construction, Inc. was $884,301 plus another $23,409 for concrete seat walls and accessible picnic tables.

The design for the Universally Accessible Playground was approved in June; Katherine Spits Associates, Inc. was awarded the design contract.

City Hall had also initiated a community engagement process for the new playground and included a community workshop, a focus group, outreach to the special education and preschool communities, coordination with the Disabilities and Recreation & Parks Commissions, and on-going outreach to the immediate neighbors of the project site.

“Play features were incorporated in the unique design elements to integrate play for children of all abilities,” city staff added.

According to City Hall, 750 vendors were notified to submit construction bids; 49 prospective bidders followed through with requests for bid documents and only four companies actually submitted bids.

As part of the Consent Calendar item, Santa Monica’s Director of Public Works is authorized to “issue any necessary change orders to complete additional work within budget authority.”

The city staff report submitted to council members did not indicate when construction would start, though initial plans had called for work on the project to commence in August.

In January, there was a debate at a council meeting about whether the Universally Accessible Playground was safe.

Based upon the rendered designs of the planned playground, residents at the January council meeting were most concerned about noise and potential homeless or gang activity in the area. Other concerns included proper (and free) parking, and whether children would be able to cross the adjacent bike path in order to access the nearby restrooms without the threat of oncoming bicycle traffic.

Some of the concerns stemmed from the playground’s design, which, according to the city staff report at the time, called for a “Ship Concept.” With a faux naval vessel, complete with white sails and hulls, built into the sand, some residents worried that the homeless might take residence – and perhaps fornicate – in the large prop.

All seven council members were present at the Sept. 11 meeting.