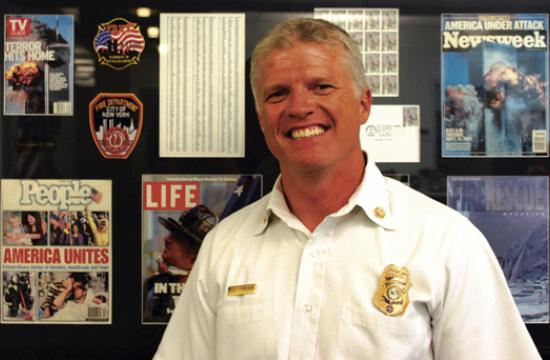 Santa Monica Fire Chief Scott Ferguson is proud to be part of a family where his father, brother, and son have chosen the fire service as a career.

He started his career in 1982 as a part-time firefighter in Federal Way, Washington, and began serving full-time with the Richland Fire Department in January of 1984.

He then moved back to his hometown in Vancouver, where he served the Vancouver Fire & Rescue from 1988 to 2001, progressing through the ranks until appointed as Chief of Training.

Ferguson spent five years in Arizona as the Peoria Fire Department Deputy Chief of Operations, and prior to coming to Santa Monica in March of 2010, he was the Fire Chief in Manhattan Beach for two years.

The wheels are in motion for a new fire station in downtown Santa Monica to replace the aging station on 7th Street. Can you explain why it is needed and what may make this new station unique once complete?

The existing station #1 is currently located at 1444 7th Street. It was built in 1955 and was later added on to in 1970. While it served both the department and our community well for years, it was severely damaged by the 1994 Northridge earthquake. A structural engineering firm has since deemed it unsafe in its existing condition, requiring that it would be seismically retrofitted. This type of remodeling would not only shrink the existing footprint, but would also trigger ADA, OSHA, and fire sprinkler retrofitting requirements. That, combined with growing training and operational needs, made finding a new site a high priority for Council and city staff.

We were very fortunate that property was found near the old station – this will allow us to maintain our low response times in the heart of our downtown. The new station will be located just north of the old one at 1337 7th Street. Aside from the more contemporary living amenities for our first responders, it will also allow for improved parking.

Captain Matt Norris is being recognized at this year’s New Heroes celebration. Why was he selected and what makes him such a great firefighter to be honored?

Matt is one of those guys that if you were to build a team from scratch, he would be drafted in the first round. From a firefighter’s perspective, it is clear that he genuinely cares about his crews and their families. Matt makes them work and train hard, but he is always by their side leading by example. From a Fire Chief’s standpoint, Matt’s also valuable because he takes on extra projects, including managing the budget, resources, and training of our Urban Search and Rescue team. That being said, what makes Matt special is his heart. For several years, he has succeeded in getting people to shave their heads in an effort to help find a cure for childhood cancer. The annual St. Baldrick’s event usually occurs in September – a photo of my head will probably show up at my retirement dinner!

What do you like most about the New Heroes event, which is now in its 18th year?

For many of our new employees it is their first introduction to the community. Santa Monica’s solid reputation allows our fire department to be very selective, which means some have been hired from out of the area, and occasionally from other states. The New Heroes event serves as kind of a portal to the great relationships they will enjoy over the course of their careers.

Beyond your role as Fire Chief, how else are you active within the community and why do you think it’s important to be so involved?

I suppose that the easy answer would be to say that it comes with the job. It is critical that Fire and Police Chiefs are connected to the community; our citizens have to feel that we are approachable and in touch with their needs. Of course that happens at gatherings and events, but people often feel more comfortable communicating in more casual settings; that comes with familiarity. The more personal answer is that my wife and I like spending time with people – we have developed some life-long friendships by just getting involved. I serve in some capacity with the Rotary Club, Human Relations Council, YMCA, and Santa Monica Collage, and support the Police Activity League.

With two-and-a-half years under your belt in the City, what do you think you have achieved so far and what are some of your future goals for the years ahead while you are at the helm?

Right out of the gate, it became apparent that our firefighters had a unique pride and drive to be the best. It was also clear that they provided remarkable on-scene customer service; after serving for three decades in other areas, that is not something that I take for granted. That kind of professionalism allowed me to spend my first two years focusing on the business aspects of the job: strategic planning, budget, data analysis, and regional grant allocations. Those efforts are beginning to pay some dividends. We have also hired and promoted some new team members.

While we have spent considerable effort to strengthen our connections with the schools and community, my intentions are to increasingly focus on public and private relationships, including those fostered through the Chamber of Commerce. More visible results will be seen in the building of our station and the coming of light-rail. Like the rest of the community, we believe that Metro will bring remarkable opportunities – we just want to be sure we are adequately prepared the impact it may have on response times and travel corridors.

You have worked your way up the ladder at various agencies before coming to Santa Monica after two years as Fire Chief in Manhattan Beach. Are you here to stay long term?

Those that know me best would say that I do not fit the mold of a typical fire chief. My family includes three generations of fire fighters starting with my father and extending to my son and younger brother in Washington State. The truth is that I decided to be a Fire Chief about the time I committed to be a firefighter. I can’t say for sure, but my competitive nature probably got the best of me. Although the early decision has been at times both a blessing and a curse, it did serve to crystallize what type of department and community I wanted to be associated with.

Put simply, it would have to be small enough that I could get to know our firefighters personally, including their families – I sometimes struggle with names, so that would be no easy task. It would also have to be structured where I would have the time to teach and train with the crews on occasion, instead of my time being saturated with the business of the business. There would have to be challenges, and I would have to feel that what I bring uniquely to the table would fit with the demands of the job. Lastly, there would have to be an opportunity to build a strong relationship with the community. That’s why I am here. I took a very strategic approach to earning my education and getting the type of experience necessary to give me a shot of being part of something special.

In terms of my career, the only thing I can say for sure is that I have worked for 30-years to get here, and I am not eager to leave. As long as I am effective and I am needed, Santa Monica is where I will stay.