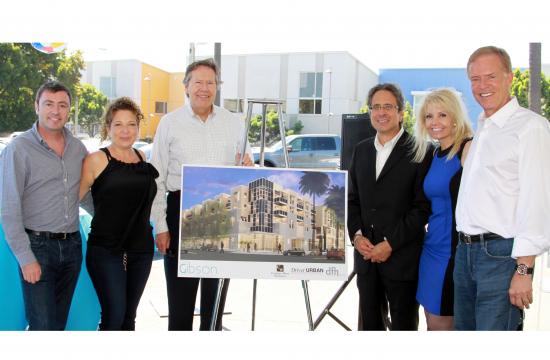 The Gibson at 7th and Arizona — a two-building, 106-unit upscale apartment development in Santa Monica — moves one step closer to reality after a groundbreaking ceremony was held Thursday.

The project is a partnership between LA residential developer Century West Partners and Connecticut-based Cigna.

“Bringing the Century West brand to the Santa Monica market is an exciting opportunity for us,” said Michael Sorochinsky. “This is a highly-desirable location that will offer residents immediate access to some of the best cultural and retail destinations the Los Angeles area has to offer. They will be only a short walk from the famed Third Street Promenade, as well as Santa Monica State Beach and Santa Monica Pier.”

The Gibson at 7th and Arizona will consist of two adjacent five-story buildings at 1317 7th Street and 702 Arizona Ave.

With a total of 106 multifamily units divided between two adjacent five-story buildings in downtown Santa Monica, residents will have access to 10,000 square feet of retail space along with 142 structured parking spaces, bike storage, a fitness center, business center and an outdoor pool.