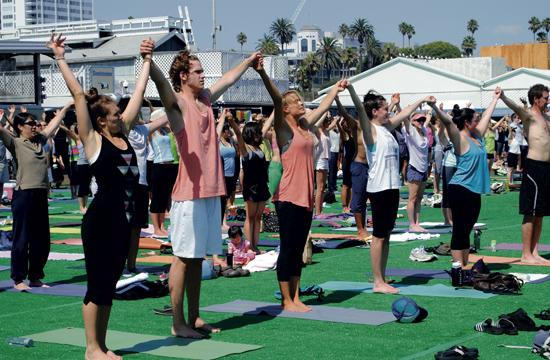 The Wanderlust Festival, in partnership with Yoga in the City and the Yoga Aid Challenge, held its Los Angeles event at the pier from 1 p.m. to 6 p.m.

Yoga in the City was inspired by different charitable organizations from around the world and its purpose was to raise money for charities.

With hundreds of eager individuals participating in this event, the atmosphere was full of positive energy. Participants ranged from different experience levels and were all encouraged to attend the event.

“Every American should be deeply concerned right now about overt and blatant efforts to suppress the vote,” Williamson said.

Seane Corn also took the stage to talk about the correlation between politics and yoga as well as the importance of this November’s upcoming election before the first session began.

Corn, co-founder of “Off the Mat and Into the World,” said she was happy to be part of the event.

She said she ultimately wanted “the participants to have a greater sense of community, and recognize the awareness that if (individuals) work together as a collective and harnessed some of the energy, great change was possible (not only locally, but) globally as well.”

She said she believed it required the individual to transform, and as a result impact the collective.

Corn also wanted people to know there are several yoga styles for many different people and encouraged them to try them out.

The first session lasted from 1:30 p.m. to 3 p.m. before breaking out into a dance party made possible by DJ Fabian, dubbed as the “World Music Impresario” by Billboard Magazine.

Sianna Sherman, an internationally celebrated yoga teacher, kicked off the second session at 4 p.m. Four renowned yoga teachers followed suit until 5:30 p.m. Then, MC Yogi, a Yoga Hip Hop artist and an inspiration for thousands, culminated the Los Angeles event with his music.

Many, like Erynne Elkins, a Los Angeles resident, thoroughly enjoyed being part of the event and would recommend this event to others.

“I liked the collective effort to get people involved and to make the world a better place,” Elkins said. “I think the highlight of today was doing a (yoga pose) that I was not able to do on my own previously, but when the yoga instructor (and I) did it together, I soared!”