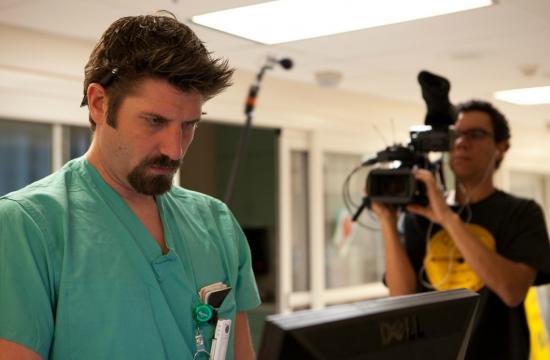 Laemmle’s Monica 1 Theater in Santa Monica will screen the West Coast premiere of “The Waiting Room” tonight, Sept. 28 at 7:40 p.m.

The California Nurses Association/National Nurses United will be hosting the event.

The film is directed by Peter Nicks, a character-driven documentary film that goes behind the doors of Highland Hospital, a large public hospital in Oakland, CA, struggling to care for a community of largely uninsured patients.

The film will be followed by a brief panel discussion about solutions to the healthcare crisis moderated by CNA/NNU.

Panel participants include: DeAnn McEwen, RN, who works in a critical care unit in Long Beach and is a co-president of CNA/NNU; Hilda Sarkisyan, a healthcare advocate who lost her 17-year-old daughter due to CIGNA’s denial of a liver transplant; and Steve Tarzynski, MD, pediatrician and board member of Physicians for a National Health Program, California.

The film weaves together the stories of several patients, as well as the hospital staff charged with caring for them, as they cope with the complexity of the nation’s public healthcare system, all while weathering the storm of a national recession.