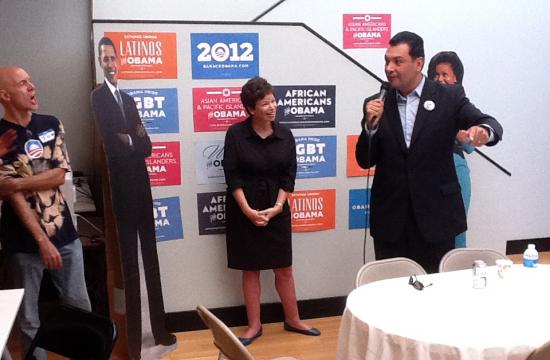 Senior Democratic Strategist Valerie B. Jarrett made the visit as her final stop of a three-campaign-office tour around Los Angeles.

Jarrett shook hands with almost everyone in the room and engaged in individual conversations with campaign volunteers.

All four gave speeches, with Padilla highlighting the importance of the Latino vote and telling the crowd about the excitement he’d seen from delegates at the Democratic Convention the week before.

“I saw it in Charlotte; I’ve seen it here today,” Padilla said.

Next, Jarrett told the crowd her purpose was “simply to say thank you.”

“We know that this campaign is going to turn on turnout, and that’s going to happen because of the work that you are doing,” Jarrett said. “We are never going to be able to raise the kind of money the other side is doing… but if I had to bet on that versus you, I’d bet on you.”

She also reminded volunteers of their ability to make up for monetary disadvantages with hard work and enthusiasm.

After the brief Q&A with Jarrett, she and Padilla shook more hands on their way out the door, and the volunteers returned to phoning battleground states on behalf of President Obama, as well as calling Californians to talk about the propositions endorsed or opposed by PPDC.