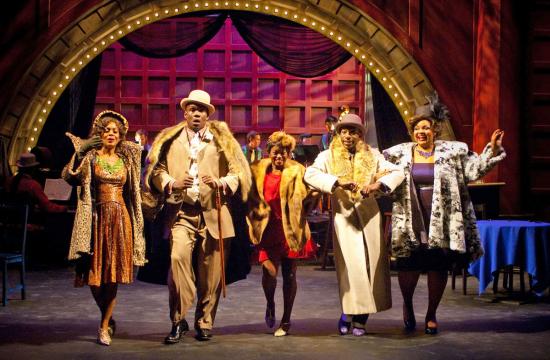 ‘Ain’t Misbehavin,’ a rousing, foot-stomping, dazzling review of the music of Fats Waller is currently on stage at the International City Theatre, closing off their 2012 season. Under the sharp direction of Saundra McClain, a Broadway-caliber cast gifts us with a delightful journey back to the heyday of the Harlem Renaissance that took place in the 20s and 30s, performing music that dominated the musical landscape of the Golden Age of Jazz.

Originally conceived by Richard Maltby, Jr. and Murray Horwitz, the musical review premiered at the Manhattan Theatre Club in 1978 subsequently moving to Broadway for a four-year run, racking up three Tonys and three Drama Desk Awards.

An old-time radio is turned on as the cast appears on stage, freezing into a portrait tableau. Time has not flattened a single note and beginning with the signature opening number, ‘Ain’t Misbehavin,’ it’s immediately apparent that a rare musical treat is about to ensue.

Performed on a simple set by John Iacovelli, the action centers around a bar and a small table, very reminiscent of the feeling of Harlem’s famous Cotton Club or the Savoy Ballroom. The Musical Director and piano player, Rahn Coleman is seated upstage right throughout the play where his expertise is demonstrated. Coleman, along with a small band, accompanies each of the performers, playing the arrangements in various styles from jazz, to stride, from ballads to torch.

Each number tops the one before beginning with a sexy, torchy rendition of “Honeysuckle Rose” sung by an incredibly talented and beautiful Jennifer Shelton and a very amusing Phillip Brandon who provides most of the comic moments, especially in his rendition of “Your Feet’s Too Big,” a rousing crowd pleaser. Another outstanding number is “The Viper’s Drag,” a homage to getting stoned, sung and danced by an amazing Lacy Darryl Phillips who regales us throughout the evening with his almost rubber body that he seems to be able to twist, turn, and leap in any direction.

Amber Mercomes has the voice of an angel with a several octave range and seamlessly transitions from head to chest (voice) with ease, moving about the stage with the grace of a ballerina. She does a fun job with “When The Nylons Bloom Again” and “Squeeze Me,” as well as in the ensemble pieces. The “baby” of the group is an adorable Niketa Calame, her Betty Boop-type voice serving her well in her rendition of “Yacht Club Swing,” and “Keepin’ Out of Mischief Now.”

Some of the more recognizable Waller tunes include “I’m Gonna’ Sit Right Down and Write Myself a Letter,” “Two Sleepy People,” “I Can’t Give You Anything But Love,” “It’s a Sin to Tell a Lie” and a tender, emotionally compelling “Black and Blue,” sung in four-part harmony by this uniformly gifted ensemble.

Adding to the wonderful production is Resident Costume Designer Kim DeShazo who dressed the cast in delicious period costumes, perfect from hats to shoes. The five-piece band, consisting of Brad Babinski (Bass), James Yoshizawa (Drums,) Caesar Martinez (Sax,) and Ashlin Parker (Trumpet,) is outstanding and sounds like it’s at least double the size. Light Designer Ben Pilat could have been a little more generous in lighting some of the scenes, but overall did a good job.

Son of a preacher, Fats Waller was born in 1904 and began playing the piano at age six. He composed his first rag at age fourteen and subsequently wrote over 400 songs, some of which are considered classic jazz repertoire. If he could have seen the current production of “Ain’t Misbehavin,’ he would left the theatre smiling and humming as most of the audience did after the performance.