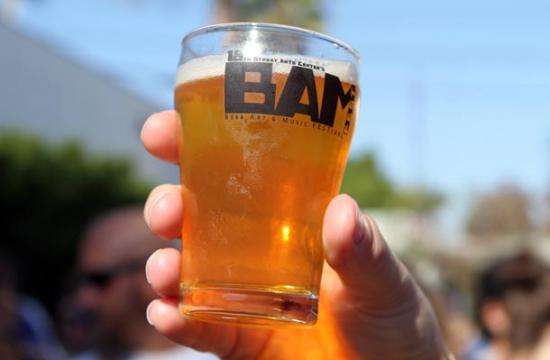 Held in the heart of Santa Monica, BAM Fest celebrates the best of locally-produced art and music in conjunction with a variety of delicious craft beers.

The event is a steal, with tickets priced at $40 in advance and $45 at the door.

BAM Fest attendees not only feel great because they’re spending a Saturday afternoon sipping in the sun, interacting with artists and exploring significant artworks while listening to groovy tunes, but also because they know that all proceeds benefit 18th Street Arts Center, a 24-year old, influential non-profit arts organization in Santa Monica.

This year 18th Street has teamed up with LA craft beer industry veteran Martin Svab (formerly of Stone Brewing Co. & Naja’s Place) to help facilitate the beer side of the festival. Participating craft breweries range from big to small, including the popular and larger Sierra Nevada Brewing and North Coast Brewing Company to the smaller but equally great Angel City, Monkish and Beachwood Brewing.

For the beer connoisseur, this year’s BAM Fest is showcasing unique and unreleased beers on tap, including a rare Smog City barrel-aged beer, hoppy treats from Ballast Point Brewing Company, and unique and uncommon brews from the Brewery at Abigaile and Pizza Port, Carlsbad.

Also included in the festivities is a Duvel-Moortgat Brewery tent featuring a number of the Flemish family’s Belgian-style beers. In addition to their tasty brews, New Belgium Brewing Company has donated their signature Fat Tire Bike Cruiser as the event’s grand prize raffle item.

And for those that aren’t as fond of beer there will also be an area to sample some of Southern California’s finest wines, home brewed sodas by Pacific Gravity Home Brewers Club, premium hand-crafted Julian Hard Cider, and all natural DRY Soda.

The music lined up for BAM Fest is just as diverse as the beer samples.

From the addictive rock & roll sounds rooted in rural blues, early country, and Appalachian folk music of “The Americans,” to the sultry vocals, feminist chicana lyrics and powerful Japanese Taiko drums of “Lysa Flores and East L.A. Taiko” the featured music at 18th Street’s festival is sure to make attendees groove.

The Los Angeles-based trio, “American Bloomers,” is founded on authentic pop music that is steeped in classic rock and folk harmonies, while “The Dustbowl Revival” mix a spicy roots cocktail with their dance-inducing live sets that merge old school bluegrass, swamp-gospel, jug-band, jump blues and the hot swing of the 1930’s. Between band sets, artist and DJ, “Freshair” will fuse an array of musical styles to keep the crowd jammin’.

Themes of tourism, revolution, design, and public sculpture are at play in the works, while formal questions about the relationship between functional sculpture and introspective form are explored.

Outside the gallery space, a streaming online radio station featuring a curated selection of some of LA’s hottest DJ’s will be hosted by Adrian Rivas, Director of Form Follows.

Rivas will interview special guests such as Patrick Miller of Barcade, Mas Éxitos and Wombelton Records while the public is invited to flip through their exclusive record collections.

Attendees also have the opportunity to experience a selection of different artist videos by 18th Street’s curator in residence, Bill Kelley Jr.

In addition, artworks are available for purchase at an artist marketplace organized by past 18th Street Lab Artist, Ana Guajardo, and the resident artists who live, work and create daily at 18th Street open their studios for attendees to experience works in progress.

And naturally you can’t have a festival in Los Angeles without food trucks.

Bold and flavorful authentic Mexican dishes by the Border Grill Truck, crispy Belgian treats by the Crispy Waffle & Frite Truck, “maneater” sized burgers from Baby’s Badass Burgers, family-farmed pork from Let’s Be Frank Dogs, gourmet organic food provided by the Green Truck, and warm flavorful pizza slices from Fresh Brothers Pizza will all be available for the hungry. This is one craft beer festival you won’t want to miss.

Don’t want to drive? There will also be a free bike valet, so cruise on down.