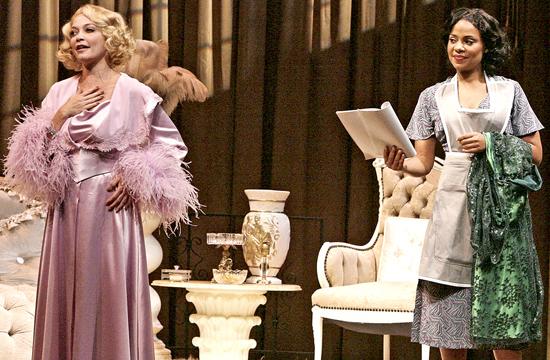 Pulitzer Prize winning playwright Lynn Nottage has written a fascinating play about Vera Stark, a mostly unknown, legendary African American actress who defied the color barrier during Jim Crow America and went on to become a famous Hollywood actress in the 1930s. “By The Way, Meet Vera Stark,” which takes us through the life and times of Stark, premiered at the Second Stage Theatre in New York and makes its West Coast debut at the Geffen Playhouse.

The more solid, breezy Act I opens with Amanda Detmer’s delightfully flamboyant Gloria Mitchell, who had been dubbed “America’s Little Sweetie Pie,” rehearsing for an audition for the lead role in the “The Belle of New Orleans,” a new movie to be directed by the fiery director Maximillion Von Oster, appropriately played by Mather Zickel, who also plays Peter Rhys-Davies, a guest on Brad Donovan’s talk show in Act II.

Running lines with the aging, gin-guzzling diva is Gloria’s far-from-humble maid, confidant, and aspiring actress, Vera Stark, played to sheer perfection by an amazing Sanaa Lathan. Vera spots the part of a slave and sets out to get cast in that role. Later, at a party hosted by Gloria, Von Oster quite passionately locks horns with the studio head, Frederick Slasvick, appropriately played by Spencer Garrett, over a differing opinion on the story line. Garrett does a good job as both the studio head and talk show host Donovan in the problematic Act II. In a very funny scene, Von Oster is explaining how he wants the “Negroes” in his film to be authentic, with true-life tragic experiences. Vera hilariously assumes the beaten down, bent-over posture and tone of a person from a tormented background and tells a fictitious sad story about her childhood that ultimately results in her landing the role.

Helping out at the party is Lottie, one of Vera’s roommates, hysterically played by Kimberly Hebert Gregory, whose crack comic timing got laughs with her sometimes deadpan, biting delivery. The third aspiring actress/roommate, excellently played by Merle Dandridge, shows up at the party with Von Oster disguised as a Brazilian actress willing to bed down with anyone in a position to launch her career. The relationships between the three women crackle with the delight borne out of living together in somewhat cramped quarters and having the same career goals.

Act II opens with promise as the final scene from “The Belle of New Orleans” is actually screened with Gloria in the lead role of the dying woman. Vera is her devoted slave/maid along with the other slaves played by Vera’s roommates. The film ends with Vera saying to her dying owner “Stay awake and together we’ll face a new day.” Prophetic? Perhaps.

From that most inventive opening, the play moves to a scene from Donovan’s talk show with an aged, alcoholic, drug-dependent Vera slurring her words and exhibiting the ravages of her addictions. Downstage is a live discussion on Vera’s legacy by panelists Carmen Levy-Green (Kimberly Hebert Gregory) and a stereotypical militant, Afua Assata Ejobo, played with just the right amount of predictable stridency by Dandridge. However, it’s here that the play begins to fall apart and becomes a forum for political expression. It went on way too long and diminishes the brilliance of Act I.

“By The Way, Meet Vera Stark,” is well directed by Jo Bonney who helped guide and shape the excellent performances given by this sterling cast which also includes Kevin T. Carroll who plays Vera’s love interest, Leroy Barksdale the chauffeur who actually helps her get the audition that ultimately launches her acting career.

For all intents and purposes Vera Stark vanished around 1973 and despite all kinds of speculations, no one seems to know what actually happened to her. So, a special thanks must go to Lynn Nottage for introducing us to this unsung hero in her fascinating, although somewhat flawed play.