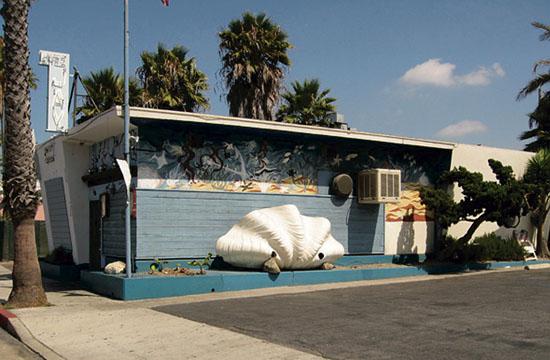 A piece of Santa Monica history earned a victory of sorts Monday evening at City Hall, as the Landmarks Commission unanimously voted the famed Chez Jay meets the qualifications to be designated a local landmark.

The Oct. 8 vote comes a few months after Chez Jay faced possible closure due to the construction of Palisades Garden Walk (PGW). With the park’s construction already underway on all sides of Chez Jay, the PGW plans called for an update of the bar and restaurant’s structure to fit the modern designs of the civic center park.

In April, council members authorized city staff to seek Requests for Proposals “for a restaurant operator to lease and remodel or construct a restaurant” that would operate at the western edge of the future Palisades Garden Walk.

However, a city assessment presented to the Landmarks Commission made a case for why Chez Jay could be designated as a local landmark.

“Chez Jay is a nautically themed bar/restaurant famous for its almost 50 year association with adventurer and raconteur Jay Fiondella and for its legacy as a combination dive bar and celebrity hangout during the same period,” the City Landmark Assessment Report stated.

“Chez Jay … continues to serve as an important symbol of Santa Monica’s history as welcoming to a diverse range of humanity from ordinary tourists, beach bums, transients, and locals to musicians, RAND employees, politicians, and television and film stars,” it continued.

Designating Chez Jay as a local landmark became an issue thanks to the Civic Center Specific Plan (CCSP), which specified “design parameters” for how a restaurant adjacent to PGW should look in order to keep consisted with the themes of the new civic park.

As described in a city staff report to council members in April, one such design parameter stated any restaurant adjacent to PGW should be a “pavilion-like” structure allowing “for the generous flow of activities from interior to exterior spaces.”

“The CCSP encourages the use of verandas, terraces, patios, and other intermediary space in the design of the restaurant,” city staff said in April. “In addition, the CCSP conceived of the ‘park-related’ restaurant and buildings as ‘complementary with the design and activity program for the park.’”

City Hall elaborated on how Chez Jay’s current design does not match the themes of PGW.

Through remodel or reconstruction, City Hall hopes the new restaurant will offer “casual dining” with a “unique aesthetic and ambiance that relates to the PGW experience by providing outdoor dining and visitor-serving amenities, catering to patrons of PGW and adjacent uses.”

Chez Jay sits on a 7,500 square foot parcel on Ocean Avenue at the western edge of what is to be PGW. Fiondella, who passed away in 2008, originally owned the restaurant. His daughter, Anita Fiondella Eck, currently operates the restaurant with Michael Anderson.

Located on Ocean Avenue between Colorado Avenue and Pico Boulevard, the future of Chez Jay may still be in jeopardy despite qualifying for local landmark designation.

According to Carol Lemlein, president of the Santa Monica Conservancy, just because Chez Jay would be a local landmark does not mean Chez Jay will be allowed to continue operating as is.