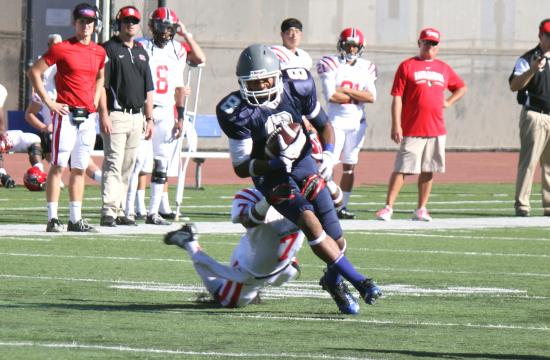 Just because the Santa Monica College (7-1) football machine got off to a slow start against Santa Barbara (3-5) didn’t mean they couldn’t pull off a victory during Homecoming week.

The Corsairs outgunned the Vaqueros 41-27 with a third quarter aerial surge that pushed them over the top to win the game on the Corsair Field Saturday, Oct 27.

Santa Monica College Head Football Coach Gifford Lindheim was excited at the opportunity to compete for another championship even though the Corsairs got off to a slow start against the Vaqueros.

“We started off the game a little sluggish, but we were able to come back and make some big plays in the second and third quarter to take control of the game,” said Lindheim. “The blocked field goal for a touchdown was huge.”

Santa Monica College defender Rico Wright scored on a blocked field goal in the first quarter running it back for 77 yards to put the Corsairs on the board 7-0.

Santa Barbara came back and scored two touchdowns after working down the Corsairs defense to make the game 14-7 by the middle of the second quarter.

But just when the Vaqueros counted running back Myles Johnson out, he scored two one-yard touchdowns to put the Corsairs back up 21-14 by the end of the half.

The first was to Ralph Gordon who scored a touchdown on a 15-yard pass from Medina and the second found Reggie Mitchell wide open on a 24-yard post route to put the Corsairs out of reach at 35-14.

Santa Barbara College attempted a comeback with running back Kevin Denis scoring his second one-yard touchdown of the game to make it 35-20 but the Corsairs were able to respond in the fourth quarter on a five-yard rush by Eric Kyle to put the game at 41-20.

Medina went 14-24 for 257 yards and two touchdowns with one interception against the Vaqueros.

Johnson rushed for 65 yards and two touchdowns against the Vaqueros.

“All in all, we did what we had to do to move on unbeaten in the conference,” said Lindheim. “We’ve got a mountain of a test coming up next week versus Pierce. We’ve got to have a great week of preparation but I’m excited. I think we’re all excited at the opportunity to compete for another championship.”

With the win, the Corsairs are currently 5-0 in the Pacific Conference and tied with L.A. Pierce (7-1) who are also 5-0.