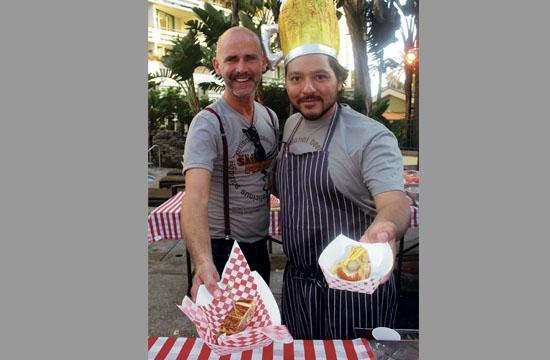 Fig Restaurant held its First Annual Sausage Fest on Sunday with a handful of local chefs, breweries, and a traditional German band to get into the spirit of Oktoberfest.

The festivities were the brainchild of Fig executive chef Ray Garcia who said he has toyed with the idea for the past few years.

“There is always the tradition of Oktoberfest that comes around every year that’s very European and we were looking for our own way to participate in a way that’s very Fig,” Garcia said. “We like to have fun, keep it very informal, casual, and approachable.”

The evening on the restaurant’s patio and around the Fairmont’s pool featured some top chefs from around LA.

Beers that were poured included those from Smog City, Hopf Wheat, Telegraph Works, and Brouwerij West. Fig also brewed and served its own beer.

Each chef created two small plates for guests to enjoy.

Garcia created a Bavarian knockwurst on a small homemade pretzel bun with Dusseldorf style mustard that had some punch to it and homemade sauerkraut.

The second dish was a green chorizo torta (Mexican sandwich) made with pork, poblano, cilantro, and beans.

Garcia said the key to a perfect sausage was achieving the right balance of flavor.

When asked if the Sausage Fest will return next year, he joked he didn’t have much choice in the matter.

“I’ve talked to a lot of people, they say ‘well, when you have it next year…’ So I think it’s already been booked for me,” he laughed.