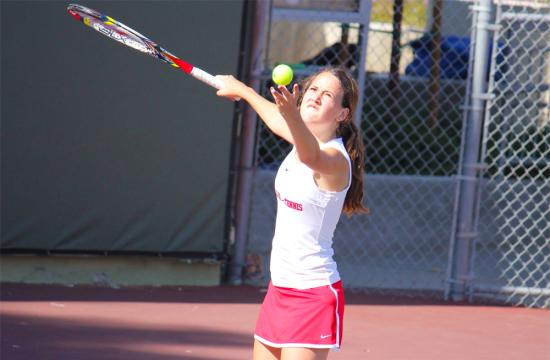 The Delphic League finals for tennis squares Lizzy Isgar of the Windward Wildcats against Shannon Gibbs of Crossroads High School before both head off to the CIF main tournament along with other members of their teams that qualified for the finals.

Gibbs won the last encounter between the top seeded pair in September 6-1.

“Both Crossroads and Windward had great days in the league individual tournament,” said Wall.

Wall is looking forward to the finals match between Gibbs and Isgar.

“It should be a dandy match,” said Wall. “Gibbs breezed through her semifinal opponent from Marshall in straight sets and Isgar gutted through a tough one against the third seed.”

Notable tennis players who will also be playing in the finals include team Crossroads Lily Lizotte and Sabrina Harris who beat their Archer opponent in straight sets in the semis after a tough quarterfinal win.

Windward’s team of Sam Schrieger and Willow Karfiol of Windward will be fighting for third place.

The finals will be held at Pasadena High School today at 2:00 p.m.