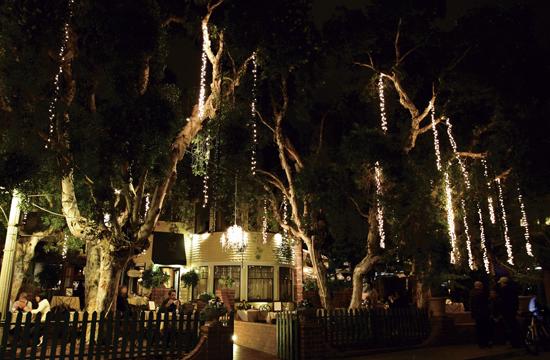 Like a zombie hungry for brains, Halloween is approaching. There are plenty of theme park-style mazes and haunted houses of horror where you can scream your head off, but what if you prefer a hint of history and mystery when you go out for dinner, or when you dare to drink with the devil in your neighborhood?

New book “Gourmet Ghosts – Los Angeles” looks at stories of spooks, murders, and other bloody goings-on at hotels and bars across Los Angeles, and while searching through the archives it came across some local stories.

The Basement Tavern in Santa Monica is a hipster hangout now, but years ago it was simply the basement of the Kyte House on Ocean Avenue. In 1973 the Queen-Anne style house was transported – lock, stock, and all barrels – along the sea front to the Heritage Square, opening as a restaurant a few years later.

Today it’s called The Victorian and is used for weddings and events, but a couple of years ago the new bar basement opened its doors and the person who came along for the ride started to look around her new home. This spirited visitor was Delia, a former owner of the building, and staff got used to nighttime noises, opening doors, flickering lights, and footsteps.

When two of Delia’s nieces made a nostalgic visit, they were sure she’d still be here keeping an eye on things, so in her honor The Basement created “Delia’s Elixir” (bourbon, agave, raspberries and lemon) – just to be on the safe side.

When the Georgian Hotel opened in 1933, it was just a few blocks from the old Kyte House. One of the first skyscrapers in the area, it was the dream of pioneer and hotelier Rosamund “Rose” Borde. She’d already opened the celebrity favorite Windermere Hotel some 20 years earlier, and it was from here that here that her sister-in-law Celine went out for a walk “without hat nor money,” reported the Los Angeles Times, and was last seen alive on Santa Monica Pier.

Her body was reportedly “cast up by the sea” several weeks later and her tragic death ruled an accident, but while the Windermere is long gone, guests at the Georgian have apparently heard sighs and gasps – even footsteps – in the Verandah Restaurant, which looks out onto the ocean.

The hotel doesn’t like to dwell on the past though, so grab their special “Georgini” cocktail (Absolut vodka and Hpnotiq Liqueur shaken with ice and served with a lemon twist) and watch the waves.

“Gourmet Ghosts – Los Angeles” is available at local independent bookstores and on Amazon, iBooks, and Nook, while further information can be found at www.gourmetghosts.com.