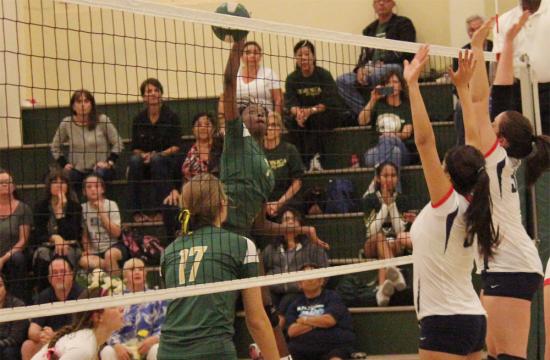 “We treated our last four matches as if they were playoff matches,” said Van Deventer. “It was no difference whether we were playing for league title or not, and we just tell the girls to weather the storm.”

“We started making some mistakes we usually don’t make,” said Gonzalez. “They were emotionally involved with a lot of things so that didn’t help us get over it.”

First set the Mariners looked unstoppable with the Mariners jumping up 13-5 and winning by ten points under the kills of outside hitter Dominique Booth who seemed to be set up for kill after kill by setter Cambria Lagana.

But in the second set, the Swordsmen bounced back under the outstanding play of outside hitters Riley Kelley and Ariel Bonderov to win 25-23.

“Outside hitters Riley Kelly and Ariel Bonderov played wonderful today,” said Van Deventer. “My setter Jillian Saenz made everything go and without her we would have been dead in the water.”

The Mariners never fully recovered from the shock of going from hot to cold and lost the next two sets to the Swordsmen who won the game 3-1 at St. Monica High School.

The Mariners are now looking forward to the CIF playoffs as the number two seed from the Camino Real League.