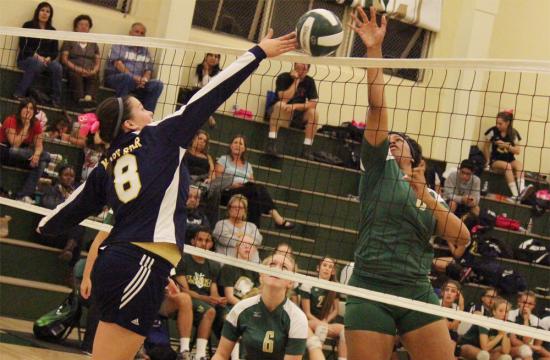 The St. Monica (9-3) Mariners outplayed Mary Star of the Sea High School (5-7) in volleyball for the second time this season capturing a 3-1 win to down the Stars after a number of intense and sustained volleys at home Tuesday night.

St. Monica High School Head Volleyball Coach Brenda Gonzalez was proud of her team for pulling off a “great win.”

“The girls worked together and it was a team effort,” said Gonzalez.

The first two sets were close with the Mariners winning the set against the Stars 25-23 and 25-21.

In the first set D’arcy Gray pushed the Mariners over the top of the Stars with a kill to win the close set 25-23.

During the second set, Stars outside hitters Katie Sullivan and Sarah Pearson kept striking back and kept the game close with numerous intense volleys.

But the Mariners finally pulled away after the serves of Reece Andavolgyi sent the Stars into chaos on their side of the court to settle the final score at 25-21.

“The season has been great and we would love to continue with another win on Monday,” said Gonzalez.

The Mariners play the powerful St. Paul Swordsmen (7-6) who are also 5-2 in the Camino Real league for league dominance Monday at home at 6:00 p.m.