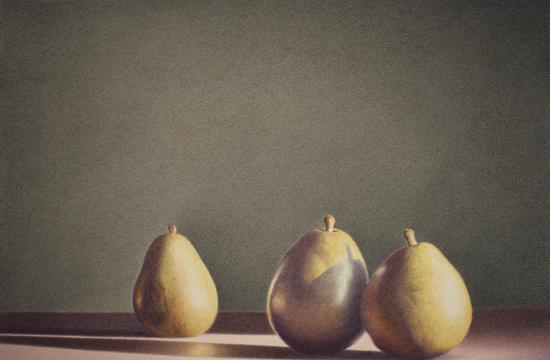 Alf, a prolific artist whose work has been exhibited nationwide over the past four decades, has become known for her cylinder painting of everyday household items transformed into mysterious objects for which the viewer often has reverence.

The opening reception is from 6 p.m. to 8 p.m. Saturday, Oct. 27. The gallery is located in the SMC Performing Arts Center on Santa Monica Boulevard at 11th Street.

A Santa Monica resident, Alf says of her work, “I found that by placing simple objects on a flat plane with a plain background they immediately assumed heightened power. Lit from one side by daylight they looked as if they were universal symbols. The simpler the object the greater was the transformation from mundane to awesome power.”

Her work has won critical praise, including this observation by Los Angeles Times critic William Wilson, who said “Martha Alf may be the only artist who ever made a roll of toilet paper look metaphysical.”

Alf, winner of a National Endowment for the Arts Individual Artist grant, has had her work exhibited since 1972 in solo and group shows all over the U.S., including New York, Los Angeles, San Francisco and Chicago. She has been featured and reviewed extensively in such publications as the Los Angeles Times, Artweek, Smithsonian Magazine and Architectural Digest.

Her work has been included in books and catalogs and can be found in many museum, private and corporate collections.

Author Susan Landauer in her book “The Not-so-Still-Life” said that Alf’s works “are first and foremost studies of color and light – not in the strictly formalist sense, but in the tradition of Rothko; they create an extrasensory ‘chord of feeling.’”

After growing up in San Diego and raising her family as a traditional housewife, she went to UCLA and studied with well-known figurative painter Richard Diebenkorn.