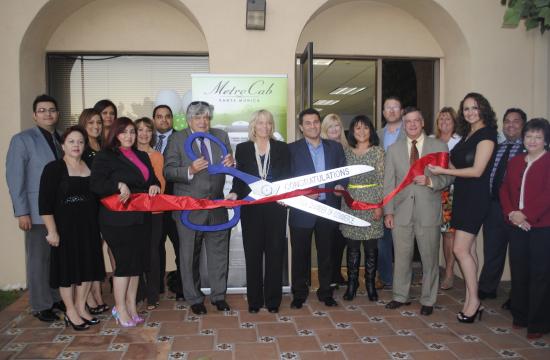 Metro Cab, one of the most prominent taxi companies in Santa Monica, celebrated its re-opening under new management and president, Ali Nasrollahi, with a ribbon-cutting ceremony on Thursday, Oct. 25.

Despite undergoing drastic changes, the staff of Metro Cab and several city officials enjoyed the celebration event, signaling a new chapter for the new company.

Metro Cab has already started to implement changes such as changing over to Eco-friendly taxis and to help the community of Santa Monica thrive by connecting all the residents of the city.

Nasrollahi said he was thrilled to lead the company in a positive direction.

“I want to keep this company on top and (to) give the best possible service to them (the public),” Nasrollahi said. “Santa Monica is a great city and am actually very happy to be a part of this franchise.”

There are three different groups that the company wants to target, according to Don Burris, Nasrollahi’s attorney.

“(We are targeting) the senior citizen and handicapped (community) and all the tourists to befriend them, which is why our drivers are trained to have as much information as possible on the Santa Monica life,” Burris said.

Prior to Nasrollahi’s ownership of the company, Burris said the previous owners were no longer in a position to take care of the business, but there was plenty of potential for the company to thrive.

Burris said Nasrollahi saw the possibilities to have a viable and environmentally conscious business and that’s why he accepted the challenge.

“He (Nasrollahi) rolled up his sleeves, took the bull by its horn, and restored the company to its rightful place,” Burris added.

Aside from this, Metro Cab is very ethnic. People from different ethnic backgrounds are working together under one company and that’s how it should be in cities like Santa Monica, Burris added.