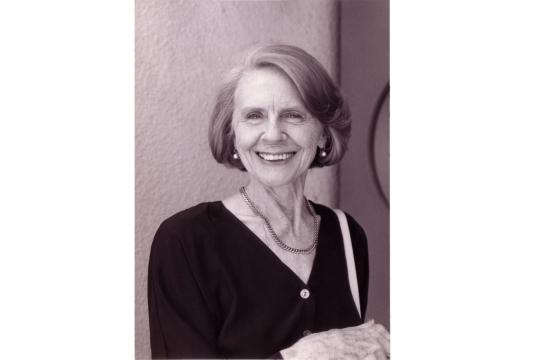 Yvonne Mounsey, whose ballet career as dancer, choreographer, and teacher spanned eight decades, died Sept. 29 in Los Angeles after a long illness. She was perhaps best known for her roles as principal dancer for New York City Ballet (NYCB) under George Balanchine. Mounsey was among the first dancers invited to join NYCB. Her most notable roles included the Queen in “The Cage” (Robbins), the Siren in “Prodigal Son” (Balanchine), the Harp in “Fanfare” (Robbins), and The Woman from His Past in “Lilac Garden” (Tudor).

Mounsey was born Yvonne Leibbrandt in South Africa, the middle of three children who included younger brother Herbert and older sister Roshild. Mounsey’s early career began at age 16 with the Carl Rosa Opera Company and subsequently included stints with Massine’s Ballet Russes de Monte Carlo (under the name Irina Zarova) and Colonel de Basil’s Original Ballet Russes, during which time she first met Balanchine while on tour in New York City in 1941. At that time Balanchine choreographed a demi-solo role for Mounsey in “Balustrade,” one of the oldest Balanchine ballets still performed today.

Due to financial pressures resulting from the outbreak of World War II, De Basil’s company abruptly disbanded while on tour in Cuba in 1941, leaving dancers, including Mounsey, unpaid. Stranded in Havana with limited resources, Mounsey found work performing through Latin America. She again encountered Balanchine in Mexico City, where she danced in his production of Les Sylphides at the Palacio de Belles d’Artes in Mexico.

After the conclusion of World War II, Mounsey returned to South Africa but in 1948, compelled by the lure of ballet at its highest level, Mounsey returned to New York City, taking classes at the School of American Ballet. That same year, Balanchine formed New York City Ballet and in 1949 invited Mounsey to join as a soloist. In less than a year, she was named principal dancer.

In 1958, she retired from New York City Ballet, returned to South Africa, and married childhood friend Kelvin Clegg in 1960. She had two previous marriages to Duncan Mounsey and Albert Hall Hughey. While in South Africa she co-founded South Africa’s leading ballet company, The Performing Arts Council of the Transvaal (P.A.C.T. Ballet).

In 1965 Mounsey and her family moved to Los Angeles where she began teaching ballet. Eventually taking over the school, renamed Westside Academy of Dance, she formed a decades-long partnership and deep friendship with Rosemary Valaire (dec. 1998). The school’s resident ballet company. Westside Ballet of Santa Monica, began performances of “The Nutcracker” in 1972 and both “The Nutcracker” and Westside Ballet’s Spring performances have delighted audiences for decades, including the past 12 years at the Wadsworth Theater in Brentwood.

The complementary styles of Mounsey and Valaire, Balanchine and Royal Academy of Dancing (RAD), provided young dancers with a high degree of discipline and precise training. Westside Academy of Dance became one of the nation’s leading pre-professional dance companies with several dozen of its alumni, both men and women, going on to dance with prominent ballet companies around the world, including the New York City Ballet, American Ballet Theater, San Francisco Ballet, Pacific Northwest Ballet, Houston Ballet, as well as international companies such as the Bolshoi. Others who trained with Westside Ballet include Elisabeth Moss, actress whose career includes starring roles in “Mad Men” and “The West Wing” among others.

Mounsey was the recipient of the 2002 Lester Horton Dance Award for Lifetime Achievement and the 2008 Gabriella Axelrod Education Foundation’s Award for the Advancement of the Arts.

Mounsey is survived by her sister, Roshild Collard of Cape Town, South Africa, daughter Allegra and grandson Marcus of Los Angeles, and by stepsons Christopher Clegg of Los Angeles and Stephen Clegg of Lincoln, Nebraska.