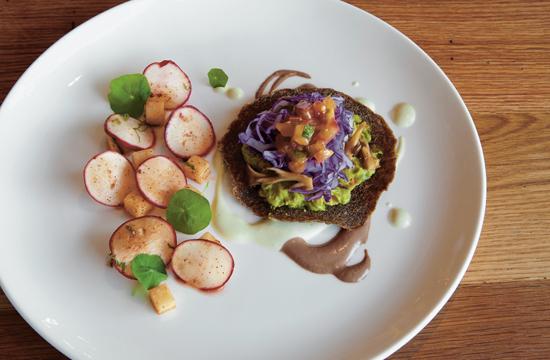 A vegan raw cooking school and restaurant has opened on the rooftop dining deck at Santa Monica Place, in the space once briefly occupied by Piero Selvaggio’s short-lived Primi Al Mercato trattoria and pasta shop.

M.A.K.E. cooking school and restaurant is brought to us by chef, cookbook writer, and vegan raw food advocate Matthew Kenney, a classically trained chef who has earned awards as a chef working in mainstream restaurants on the east coast.

But Kenney says all that changed when a friend took him to a raw food restaurant.

“After eating there, I felt so good, not heavy. Everyone there looked so healthy,” he said, and he began to re-think the way he cooked.

Kenney looks younger than his 48 years and says he no longer has aches and pains since he began eating a diet of raw plant-based food – no animal products, processed or pasteurized food, no sugar or wheat.

Raw food proponents believe nutrients and enzymes are lost when food is heated to more than 105 degrees, so other cooking techniques are used rather than heat. Dehydration, thermal immersion (cooking at low temperature in water), a smoke gun that adds smoke flavor without heat or cooking, fermentation and marination are some techniques Kenney uses to make raw cuisine.

Anyone can learn Kenney’s approach to raw cooking at the culinary school, a gleaming white space that’s outfitted with the likes of dehydrators, a Pacojet ice cream machine, and specialty slicers. The school has work stations for 12 students, each stocked with its own refrigerator, cutting board, blender, and utensil drawer. The curriculum will emphasize making raw cuisine from whole, organic, unprocessed plant-based foods.

With all the limits imposed on the preparation of raw plant-based food, how good can it taste?

At an introductory tasting at the culinary school, a beet carpaccio salad of thinly sliced raw red beets served with nut cheese and micro greens was a mixed bag. The nut cheese, made with only macadamia nuts, cashews, ‘probiotics,’ and sea salt, was surprisingly rich and creamy, but the raw beets lacked the full flavor of roasted beets. A scoop of chocolate ice cream made with raw cocoa powder tasted close enough to the real thing, but its texture was more like a semifreddo – this ice cream doesn’t melt.

These dishes and more will be on the menu of the restaurant, which will also serve wine and cocktails.

“The only way people will eat healthy food will be if they like it; enjoy it,” Kenney says.