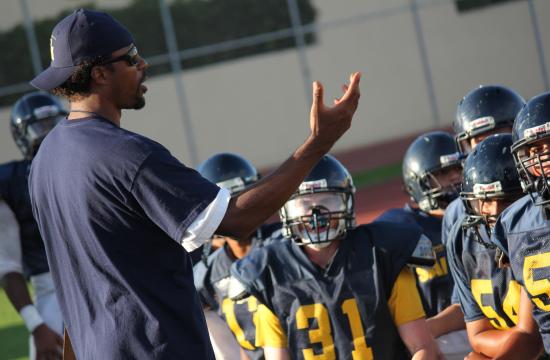 Santa Monica High School (6-3) Football Head Coach Travis Clark and the Vikings have weathered the storm clinching the Ocean League title 4-0 for the second year in a row to assure them the top spot a week before they sail into the CIF Southern Section Western Division IV playoffs.

Clark and the Vikings cemented the Ocean League crown last Friday with a 39-10 win over a higher ranked Inglewood (6-3) team dropping the Sentinels to 3-1 in league play to eliminate the last real challenge standing in the way of Santa Monica High School to capture a league title.

For Santa Monica High School’s last game of the regular season, they play what should be an easy league game against Hawthorne (1-8) this weekend.

But the ship to success hasn’t always had smooth sailing for Clark and the Vikings who found themselves rocking in murky waters for a few games early in the season.

Clark knew full well that his team would have to grind through non-conference Division 1 heavyweights Mater Dei (7-2), Valencia (6-3), and Hart (7-2) before climbing to the crest of the wave to continue the joyride again.

Battling these top-notch teams may have helped to develop Santa Monica’s offensive and defensive lines as well as contributing to the Vikings recent victory over Inglewood.

“Our victory over Inglewood was won in the trenches,” said Clark. “Our linemen controlled the line of scrimmage and both sides of the ball and have been getting better every week. It was very encouraging moving forward for them to manhandle the other team and win on the road.”

Clark believes that the path he set forward for the Vikings early in the season has taught them to be hungry, and that Santa Monica High School was given the opportunity to play against some of the best teams in Southern California.

A solid foundation gained from these experiences should push the Vikings far in the playoffs.

“In playoff football we are going to play teams like Hart and Valencia but I don’t think we’ll see another team like Mater Dei,” said Clark. “Chaminade, Lompoc, and Serra are probably equivalent to Valencia or Hart and everybody else is pretty much the same. Our goal is to play one of those guys if they are the last ones standing, and I think that we are going to be able to go back and take from our experience and apply some of our knowledge to be better prepared when we play these games.”

“This team is still improving and I think the guys are starting to believe in one another,” said Clark. “Some of these guys have never won much so this is a great feeling for them. I’m looking forward to seeing what these guys can do.”

Next game for the Vikings is home against Hawthorne Friday, Nov. 2 with the first round of the CIF playoffs kicking off the following week.