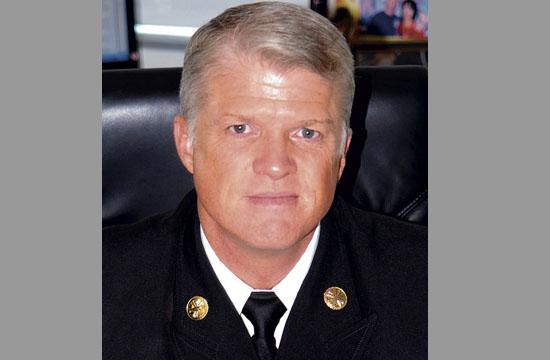 Several months ago, a relatively modest looking package arrived at the front desk of the Fire Department’s administrative office. As promised, a friend left a copy of a book entitled, “The Richest Man in Town,” written by V. J. Smith. Sandwiched within its glossy hard cover was an inscription that read, “Thanks for the great round of golf – Lloyd Torgerson – St. Monica.”

Every once in a while, I run across a story that recalibrates my sense of purpose; not so much in the traditional sense of right or wrong, but in the subtleties of what is necessary to survive the barrage of caustic blogs and headlines that have become fixtures within our local landscape. A source of encouragement may be as familiar as a friend or coworker, or as benign as a roadside billboard, a few characters in a tweet, or a smile from a stranger standing in line at Starbucks.

Our organizational mood has been somber lately. Over the span of just a few months our members have attended several funerals for area fire and law enforcement officers that have lost their lives, many in the line-of-duty. Not long ago, two firefighters were killed in a structure fire in San Francisco, in an incident eerily similar to one our Santa Monica fire companies had experienced earlier in the year; even the streets were each named Berkeley.

The incident was certainly tragic enough, but what really caused me grief were the comments smattered at the base of an online news source after their funerals. In such a case, one may expect remarks extolling them for their service and ultimate sacrifice. Instead, what I found were 31 comments from the likes of Bob, WASP, chris, Igus, and ptown…each lamenting the cost to the city for providing the memorial service and the unjust burden of firefighter pensions.

Given the steady stream of headlines broadcasting the current condition of our state and local government, one can easily appreciate the surly mood of the average citizen. But the picture painted by these anonymous bloggers is not an accurate representation of the men and women I have come to admire. So, I was looking for a reason to smile.

On this day, my inspiration began at the gym. As I labored alongside my wife Maria, I braced the small book against the console of the elliptical machine and began to turn the pages. Written in simple prose, the author told a story about a man he met while shopping at Wal-Mart in Brookings, South Dakota.

By most accounts, Aaron (Marty) Martinson presented himself as a rather unremarkable man from the Midwest. As evidenced by the black and white photos in the final pages, one might imagine by his kindly smile, flannel shirt, and trousers cinched above his centerline that Marty lived a simple but gratifying life with his wife Mickey and their four children. Equally unassuming is the town of Brookings, home to no more than eighteen thousand people; twenty-nine if you include the students who attend the local State University.

Thinking about it, I guess that is one of the things that make Marty’s story most compelling. He grew up during the thirties and forties, and like so many others of his era, struggled to make things meet through the Great Depression. Marty left school after the ninth grade to work in a traveling carnival before joining the army and fighting in the Philippines during World War II. Once discharged, Marty met Mickey. They courted for two years and were married in a furniture store by a justice of the peace on June 1, 1950. It cost them two dollars.

Marty’s memories of his father moving from town to town looking for work, eating fried corn mush, and losing close friends in the war seemed torn right out of the pages of Tom Brokaw’s rendering of the Greatest Generation. The narrative was a testament Smith’s ability to set the stage in the following chapters for what made Marty stand apart.

The connection to our first responders is not hard to make but surprisingly difficult to express. You see, just a few short days ago the Santa Monica Fire Department welcomed 12 new recruits to our family. Staring at them at attention in their tightly pressed uniforms and polished boots it is not difficult to share with them a message of duty, honor, and courage. Even as a chief officer, I could not help but admire them for their commitment. What I found difficult…what I have always find difficult, is how to fuse 30-years of my personal journey…and the journeys of all those that have influenced on my life…into a few short moments of meaningful truth. The Monsignor’s gift help put it in perspective.

Marty’s name badge said checker, but what made him special was his ability to distil things down into their simplest form:

Relationships matter most in life.

Try to do a little more.

Only you can make you happy.

It did not matter if the customer was a grouch or just generally distracted, Marty apparently had a knack for stopping time. With little more than an earnest handshake and an occasional hug, he had an ability wedge a smile on the face of a person that otherwise would have continued slogging mindlessly through their day. It is here that I found the answer.

On September 25 the Santa Monica Chamber of Commerce hosted its 18th Annual New Heroes Celebration. For those that have not attended, it is in essence a remarkable welcoming party for our local teachers, police officers, and firefighters. Honestly, when you consider all that those in attendance do for our community, it can be a pretty humbling experience. In fact, looking across the sea of faces in the crowd I realized what message I should send to our future generations of first responders.

My advice: take your lead from our real Santa Monica community heroes. Model yourselves after people like Nat Trives, Jean McNeil Wyner, and Monsignor Lloyd Torgerson. From what I know, the pages of their life’s book would be filled with stories like those of Marty Martinson. They have lived through decades of contrast between the wonder of innovation, discovery, and courage; and the kind of ugliness spawned by fear and intolerance. And yet, their narratives remain an inspiration.

In their honor, I would offer that our firefighters should remain hardened by their resolve, not in their spirit; have the strength to stand on principle and guard against cynicism; never underestimate the power of smile, a handshake, or a hug; and, allow the memories of those that sacrificed everything to resonate as powerfully in every tomorrow…as they do today.

I don’t know the Monsignor that well; one can only share so much on the golf course. But, I have shaken his hand, given him a hug, and after a few feet turned around, smiled and had a better day having met him.