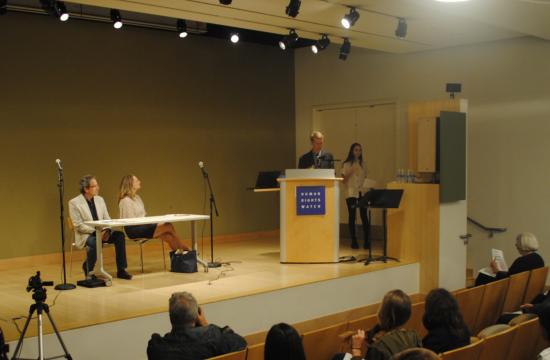 As part of their yearlong “Right to Education” campaign, members from the Human Rights Watch Student Task Force initiated the idea with the League of Women Voters of Santa Monica to raise awareness of Propositions 30 and 38. Both of these props will impact the public education of California directly. The hour long discussion between 50th Assembly District candidates Richard Bloom and Betsy Butler was held to gain their views on education.

“If Proposition 30 fails, there will be approximately $6 billion in lost revenue to K-12 (education) and community colleges which will come out of our budgets in January,” Oakley explained. “Proposition 30 impacts personal income tax. It raises personal income tax on Californians filing a single tax payer and earning $250,000 or greater. The measure also increases the sales tax by a quarter of a percent.”

Escobedo followed saying she was thankful to have an excellent education despite living in the City of Bell, which is currently having struggles in education. However, she recognizes the challenge this generation faces: one that is tougher than when she was a student.

“As California has become a majority-minority state, we have to think critically about how are we, as Californians, going to sustain our place as the world’s ninth largest economy if we’re not investing in the foundation that helps us generate jobs, which is early childhood and K12 schools,” Escobedo said. “In terms of the mechanics, Proposition 38 is a 12-year tax initiative. We raise about an average of $10 billion and in the first four and a half years, we set aside 30 percent of those funds in recognition that our state is going through some financial challenges. Those 30 percent of money available could be utilized to fund other services like higher education or social services so that there is no need to enact trigger cuts.”

After a student-led Q&A session, candidates Richard Bloom and Betsy Butler discussed the importance of education to them and the innovative ideas they will present if elected to the 50th Assembly District.

“When I was elected to a city council position in 1999, I was our only council member that had school and children as his priority,” Bloom said. “I made education an even higher priority for our community.”

Over the course of 13 years Bloom increased the direct school funding’s from $3.25 million to $14.5 million annually. He plans on bringing his involvement with the youth to Sacramento as well.

On the opposing side, Butler is prepared to invest in education, and include robotics and women in it.

“Every generation has their civil rights crisis and education definitively is yours (this generation’s),” Butler said. “Education is the priority of the state of California. However, we have a balanced budget economy which means that if we don’t have enough money, we have to cut some systems. Don’t take offense gentlemen, but women are extremely important to education.

“I’m also on the education committee and I always hear how we (the citizens) can be able to invest in our students now. In 18 years from now you need to make sure you have the skills to go forward. This is why funding education is crucial for your generation, especially.”