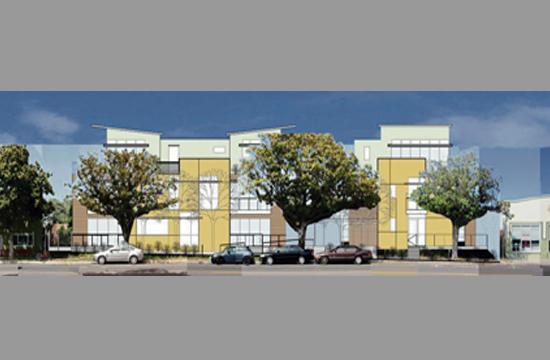 A shorthanded Santa Monica Planning Commission unanimously recommended a 19-unit condominium project with a 41-space subterranean parking garage last Wednesday night, but not without weighing concerns voiced from neighbors living next to the proposed development.

Vice-Chair Ted Winterer and Commissioner Jason Parry were both not present for the vote.

The three-story, 34-foot tall, 27,470 square foot, “market rate condominium complex” would be located on the east side of Fourteenth Street between Santa Monica Boulevard and Broadway.

“This project will replace an abandoned nursing home, … provide new residences, (it is) pedestrian-friendly, and will enliven the neighborhood,” Ralph Mechur of Ralph Mechur Architects told commissioners.

Mechur, who brought a scaled model of the proposed project to present to planning commissioners, represents the property owners and designed the plans for the 19-unit condominium project.

City staff said the current design proposes a separation of the three buildings in order to reduce the scale of the overall project.

“The proposed project is designed to be compatible with the surrounding neighborhood which primarily consists of multi-story, multi-family residential buildings ranging between two- to three-stories in height with an eclectic mix of architectural styles,” City staff said.

“The courtyard provides pedestrian-oriented amenities including benches and planters with extensive landscaping. Each ground floor unit has a patio to provide private open space; the upper floor units have either a terrace or balcony,” City staff explained. “Parking is provided in a single-level, 41-space semi-subterranean parking garage.”

An anonymous letter was sent to City staff opposing the proposed project, citing issues with the overall project size, potential increase in traffic, asbestos, and the lack of on-site affordable housing.

Some residents who lived near the proposed project and spoke at the commission meeting said while they liked the design of the building, they were concerned about noise during construction as well as asbestos and dust emanating from the current building’s demolition.

Many speakers also expressed concern about the property’s current owner, stating they have not properly maintained the current building there. Common complaints included the discovery of feces, roaches, and rodents, among others.

“The Architectural Review Board must review and approve the project’s design, building materials, colors and landscaping prior to submitting plans for building permits,” City staff stated. “The current project has been revised from the previously-approved design to provide a better modulated and pedestrian-oriented design in order to minimize the perceived massing and enhance the project’s compatibility with the property to the north, as well as the surrounding neighborhood.”

Planning commissioners considered the project as part of the applicant’s request for Development Review Permit. The project had previously been approved by the City Council in February 2008.

The project is located at 1433 Fourteenth Street and is owned by 1433-37 14th Street LLC. An existing one-story, almost 15,000 square feet, 69-bed convalescent home would be demolished to allow for the construction of the condominium development.