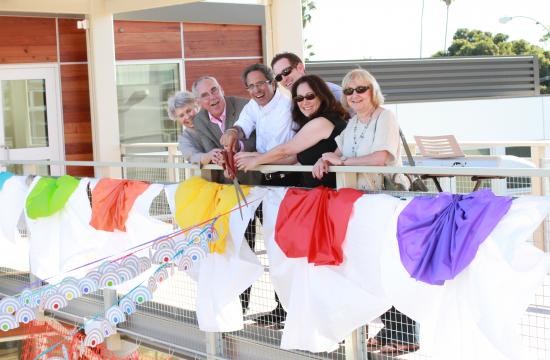 PS1 Elementary School, located at 1225 Broadway in Santa Monica, realized a decade-long dream on Sunday when it dedicated its brand new building and play yard with a community-wide celebration.

Marking its 40th anniversary this year, PS1 espouses a philosophy of “pluralism,” which is a commitment to diversity and interconnectedness in both the community and classroom; a school where fitting in is about being yourself.

“It’s not how smart a child is; it’s how a child is smart,” said the school’s founder and headmaster, Joel Pelcyger.

A gymnasium, music room, art studio, library, and sustainable landscaping are just a few of the additions that grew behind the construction fences over the past year.

“It is significant that Joel was concerned with sustainability and the environment long before it became the fashion,” Killefer said.

The school won the 2011 Grand Prize for Excellence in Sustainable Economic Development, Social Responsibility and Stewardship of the Environment — a program annually sponsored by the City of Santa Monica and the Santa Monica Chamber of Commerce.