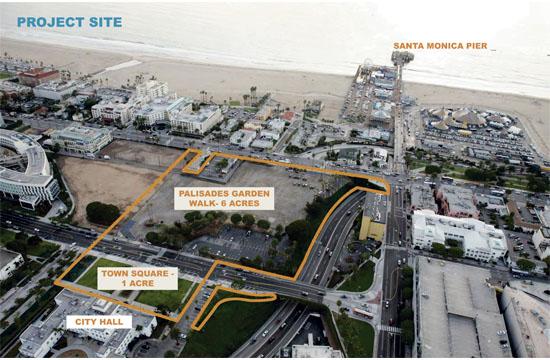 As construction begins on two civic parks in front of City Hall, council members earlier this month deliberated about what to ultimately call the areas currently known as Palisades Garden Walk (PGW) and Town Square. A decision was reached to rename Town Square after a public figure, while the verdict is still out on how best to uniquely identify PGW while also paying homage to Santa Monica’s history.

In a series of votes on the naming issue, council members unanimously approved renaming Town Square as “Ken Genser Square” after the City’s former mayor and council member who passed away in 2010.

However, council members balked at renaming PGW as “Santa Monica Commons,” noting the name would not stand out nor pay tribute to the City’s roots. However, the council did unanimously agree to designate the area currently known as PGW as a botanical garden.

The two names came to the dais after deliberation by the Landmarks and Parks and Recreation Commissions.

“Both Commissions found consensus around the name ‘Ken Genser Square’ for the Town Square site and ‘Santa Monica Commons’ for the Palisades Garden Walk site with the additional recommendation that the area of Palisades Garden Walk currently known as ‘Observation Hill’ be renamed ‘Tongva Hill’ and that an appropriate area of the park be identified in honor of the Belmar Triangle Neighborhood,” city staff wrote in a report to council members.

A few speakers at the Oct. 2 council meeting hoped the moniker “Tongva” would not be limited to just a hill but instead be applied to the entire civic park as an homage to a civilization that once – and some claim still – called the Santa Monica area home.

“The Tongva people have been here since the beginning of time. The least our government can do is name the park after the original caretakers of this land (and) who are still here. This would be the honorable thing to do,” Gina de Baca, a board member with the Pico Neighborhood Association, told council members.

“I think Tongva may be a great name for the park,” Mayor Pro Tem Gleam Davis remarked during council deliberation.

Council member Robert Holbrook said he did an Internet search and found several shopping centers with the ‘Commons’ moniker in Calabasas, Temecula, Chino Hills, and Northridge.

“I think this park needs to be distinguished from all other parks. It’s sort of at the heart of the city. I can’t imagine using the word ‘Commons,’” Holbrook said. “If you go to the Commons of Santa Monica, you might expect to find Macy’s and Target and stuff like that.”

Phil Brock, chair of the Parks and Recreation Commission, responded by saying one of the oldest public parks in the United States is named Boston Commons, while a new park in Columbus, Ohio, also carries ‘Commons’ in its name.

“The word ‘commons’ is something that was very important,” Brock said. “It is a place for all of Santa Monica to come together.”

Brock added it made sense to rename Town Square as ‘Ken Genser Square.’

Also speaking on behalf of the Parks and Recreation Commission was Vice Chair Jenna Linnekens, who said there was extensive deliberation amongst commissioners of both recommended names.

“Both the Parks and Recreation Commission and the Landmarks Commission have unanimously voted to support ‘Santa Monica Commons’ as well as ‘Ken Genser Square.’ We’ve went through a very intensive community process and we have all come to the conclusion that these two names truly embody what we hoped the areas to be,” she told council members.

Ultimately, council member decided to put off renaming PGW and will be seeking additional community and staff input before voting on a permanent moniker.

Still, PGW will be designated as a botanical garden because it “native and locally adapted plants that work with hill topography for maximum display,” with “dramatic seasonal changes” and “bold and unique forms and shapes, showcasing extraordinary plants.”

According to city staff, the Tongva people had inhabited the Santa Monica area well before Europeans and other groups arrived the eighteenth and nineteenth centuries.

Another suggested name for PGW would have paid homage to Arcadia Bandini Stearns deBaker, who was known as the “Godfather of Santa Monica” after gifting Palisades Park to the City in 1891. She was also influential in forming the Santa Monica Land and Water Company and deeded land to the Veterans’ Administration, the Bay City Women’s Club, and local churches.