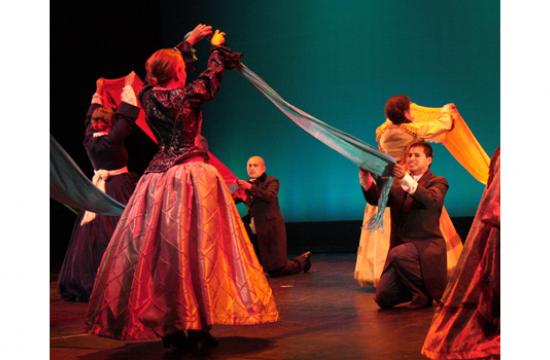 Santa Monica College’s Global Motion World Dance Company will present “Now and Then,” a program of choreography from throughout the world next month.

“Now and Then” seeks to capture the idea that history repeats itself, and in order to move forward, we have to learn from the past.

Global Motion, founded by Judith Douglas, is under the direction of Raquel Ramirez and Sri Susilowati.

Dance professors say Global Motion is a world dance performance company that expresses the concept of humanity in the form of global citizenship. The company is composed of SMC students who learn, rehearse and perform world dance styles. It provides students a platform to experience and learn about other cultures through world dance while working with choreographers who are professionals and experts in the field of world dance.

Global Motion has toured extensively throughout Mexico and California for more than 18 years – at schools, festivals, and special events.

Raquel Ramirez is co-director of Global Motion and a dance professor at SMC. She is also the founder and director of a folklórico performance group, and is dedicated to supporting the traditions and cultures of Mexico.

Sri Susilowati, originally from Indonesia, is co-director of Global Motion and member of the SMC dance faculty. She is a dancer, choreographer and storyteller, creating and performing traditional and contemporary works that focus on community, gender and ethnicity.

William Burke is a guest choreographer who has been involved in world dance for over 50 Years. He will be presenting a suite of dances from the Shope area of Bulgaria.

Gustavo Gonzalez is a faculty member at SMC and has worked in the field of dance for over 30 years. His Pre-Hispanic dance piece, “Noche de Docellas,” is based on early Mesoamerican cultures, portraying two young maidens who wander into the night.

Glenn Rodriguez has a background in world dance from SMC. His dance piece, “Repercussions”, embodies the aftermath of a broken relationship and the voyage to rediscovering one’s self.