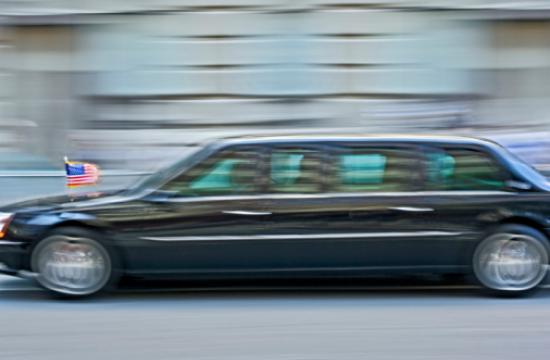 The Los Angeles Police Department says the following streets may experience temporary closures today and tomorrow while President Obama is in town to attend three events.

The LAPD says the following closures and routes are subject to change.

— Avenue of the Stars between Olympic and Sunset boulevards

— Avenue of the Stars between Wilshire and Pico boulevards

— Motor Avenue between Pico Boulevard and the Santa Monica (10) Freeway

— Avenue of the Stars between Pico and Santa Monica boulevards

— Avenue of the Stars between Pico and Santa Monica boulevards

Motorists are encouraged to plan to avoid those areas when traffic may halted for the president’s motorcade.

According to reports, Obama will join Bill Clinton after he arrives at LAX between 1 p.m. and 2 p.m. and speak to 12 attendees at a Westside fundraiser.

Tonight, Obama and actor George Clooney will speak at a “30 Days to Victory” concert (about 6000 people have paid $44 to $2500 to attend) at the Nokia Theatre at the L.A. Live in downtown Los Angeles.

Following the concert, Obama will speak to about 150 guests at a $25,000 per person fundraising dinner Wolfgang Puck’s 24th floor restaurant at the Ritz-Carlton that’s next to L.A. Live with the money going to Obama’s reelection fund, according to the LA Times.