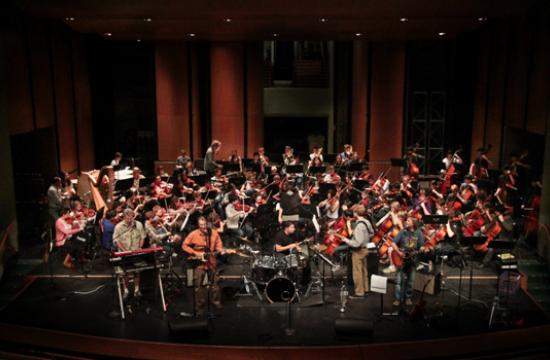 A celebration of the music of The Beatles featuring the award-winning Samohi Symphony Orchestra returns to Santa Monica this Friday, Oct. 5.

The event starts at 7:30 p.m. in Barnum Hall, on the campus of Santa Monica High School.

“This is a rare opportunity to see the music of the Beatles performed by a live orchestra, fronted by a rock band, said Steve Nemzer, of the Samohi OPA. “Last year’s show was an absolute knockout – this is an event not to be missed by anyone who loves the Beatles.”

General admission tickets are $20, and $10 for students, and can be purchased at the door or online at http://www.brownpapertickets.com/event/272587.

Audience members are encouraged to dress up as their favorite Beatle, a Mod or a Rocker.

A protégé of Beatles publicist Derek Taylor, host Martin Lewis will share personal anecdotes about the Beatles and their music.

“We’re thrilled to have Martin Lewis again as emcee for The Beatles at Barnum,” said Scott Ferguson, event producer. “He’s a world-renowned Beatles expert, a humanitarian, and brings a personal Beatles connection to the performance.”

Among his many credits, Martin Lewis wrote and hosted the documentary Re-Meet The Beatles!, and produced The Fab 40!, celebrating the 40th anniversary of the Beatles’ first US visit.

The Beatles at Barnum features guest vocalists and instrumental performers, such as guitarist Jake Noveck, who in 2011 brought down the house with his solos on “While My Guitar Gently Weeps.”

“Barnum Hall has a long history as a stellar venue for pops collaborations between student performers and local artists, such as David Crosby, Jackson Browne, and the band America.” said Ferguson.

“The Beatles at Barnum continues in this tradition. And besides being a fantastic show, the event helps raise funds for the Samohi Orchestra program.”

Visit Samohi Orchestras online at Facebook at http://www.facebook.com/#!/pages/Samohi-Orchestras/102452568068, and on the web at www.samohiorchestras.org.