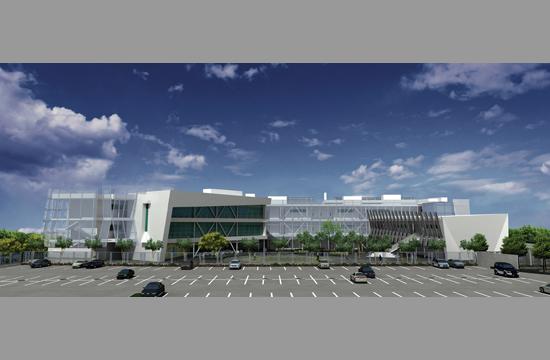 Six years ago, the Santa Monica-Malibu Unified School District (SMMUSD) developed a Facility Master Plan that required about $1.2 billion to make improvements to all of its 16 campuses across the district.

The Facility Master Plan received its first installment in 2006, when Santa Monica residents passed the Measure BB Bond worth $268 million, which has seen many projects begin such as the Science and Technology Building at Santa Monica High School (pictured above).

With $932 million of projects still required to complete the plan, the SMMUSD is hoping to receive additional funds in the form of Measure ES worth $385 million when Santa Monica residents go to the polls on Nov. 6.

The Mirror sat down with SMMUSD Superintendent Sandra Lyon, SMMUSD Board Member Laurie Lieberman, and SMMUSD parent and Financial Oversight Committee member Paul Silvern at the district headquarters to discuss Measure ES and why it’s crucial it receives voter approval.

“For us, it’s critical,” Lyon said. “We have a lot of unmet facility needs and this bond will allow us to take care of those. As you know, the State of California makes us have to go this route to get our facilities taken care of. We have old buildings, we have safety concerns that we’ve been working on across the district, and we will have elementary plans that we want to finish.

“We have projects at Malibu High School that are unfinished. Samohi (Santa Monica High School) has a whole lot of work that it needs with those 100-year-old buildings to really get it up to speed.”

Since the 1940s, all of the major facility improvements to district schools have historically been paid for by local bond measures, Silvern said.

“We count on the state to provide a big share of our overall operating budget, which has been downsized significantly in recent years as a result of the recession and the problems that the state is having balancing its own budget,” Silvern said. “But merely all the facility funding of any scale, other than routine maintenance and very minor improvements, has always been paid for by local revenue.”

Lieberman said the bond would also allow the SMMUSD to “really come into the modern world in terms of technology.”

“There are no operating monies to pay for technology, there is no state funding for it, so there really is no other way for a public school district to modernize technology and keep abreast like private schools and schools in other states are doing in their classrooms,” Lieberman said.

According to the Future Facility Improvements Project dated Aug. 1, 2012 on the SMMUSD website, about $677 million of construction projects are outstanding.

About $93 million is required to remove 40 temporary relocatable classrooms at district elementary schools that will be replaced with new buildings. These schools are Roosevelt (9), Franklin (6), McKinley (6), Grant (6), Cabrillo (4), Muir/SMASH (4), Webster (3), and Will Rogers (2).

At Santa Monica High School, the plan calls for about half a billion dollars of improvement projects:

• $58 million for a new academic/administration building. It would be built after the current language building is demolished. About 120 parking spaces would be built below.

• $90 million for a new language/library building. Again, the language building would need to be demolished for space to construct this two story 60,000 square feet building with 156 parking spaces below. It would include building boilers in the basement.

• $65 million to demolish the art building and construct a new two story 30,000 square foot art classroom building with an art gallery above the new parking structure.

While there is no indication of what projects will benefit first if Measure ES passes, Lyon said there was a Prop 39 Oversight Committee that makes sure the funds are used appropriately.

“This master plan has been done, we’ve worked on part of that, there’s still projects that are planned for that now need to be taken care of and no funds have been allocated to them and they haven’t been started,” Lyon said. “Those will be the projects that we will be able to initiate, fund, and complete with the new bond measure.”

While there is a completed master plan, Lyon said if Measure ES passed the school site committees would immediately convene to determine if the priorities at each of the campuses remain the same or if school sites would like to update the project list and priorities.

If Measure ES does not pass – meaning it does not collect at least 55 percent voter support – Lyon said these projects won’t be able to be initiated or completed.

“Our concern from my seat is ongoing, how do we manage,” she said. “We aren’t even able to do deferred maintenance kind of projects or small capital projects because we just don’t have the operational revenues that before we had deferred maintenance funds. Now because of the cuts in state budget, we’ve actually used those to offset the 22 percent deficit we have in every dollar from the state. We really are behind in terms of facilities and are going to continue to be that way.”

Lyon said she wanted to stress that the district’s operational funds come from the state, which have “distinctly diminished over the last six years and we’ll continue to be so.”

“If neither tax measure passes in November, we are looking at mid-year cuts and ongoing cuts,” she said. “With the bond, we need it to pass so that we can continue to take care of the facilities that are students are going to be at. So we’re are going to be letting people know what our need is and that without it, we aren’t going to be able to do the things we need to do on our campuses to make them places where parents want their kids to be, kids want to be, and we all have the equipment and technology and all the pieces you want in a current learning environment.”

Silvern said Santa Monica High School would receive the bulk of the money as it’s the biggest campus in the district and the one most of the district’s student body matriculate to other than Malibu.

“Santa Monica High School is over 100 years old now,” Silvern said. “With the exception of the new Science and Technology building which is being built as a result of a relatively modest allocation from Measure BB, there’s been no major work done at the high school throughout its history. It’s in serious need of repair.”

Measure ES is a general obligation bond which is secured by property tax revenue within the district.

All individuals and businesses that pay property tax pay a percentage towards the cost of financing the bonds.

Silvern said the election was not about issuing bonds per say, but getting the voters authority to issue bonds.

“If the voters pass the measure as we hope they will, then the district will go through a planning process to figure out the details of the specific projects, architects will come up with specific design drawings, cost estimates will be done, and on the basis of project by project cost estimates, a sequence of individual bonds will then be issued in a way that complies with state and federal law and matches the cash flow needs of putting those projects in the ground,” he said. “Depending on the way the individual bonds are sized and sequenced, will determine how much property owners pay. There is a cap in the board’s resolution about what the outside amount of tax to individual property owners can be. It’s governed by state law, but the commitment of the district is that it won’t exceed $30 per $100,000 of assessed value. For a $500,000 house, that would not be more than $150 a year. (The length of the bond) depends on the sequencing of the way the bonds are issued. It could be 20 or 30 years.”

For Santa Monica residents who rent, Lieberman said the Rent Control Board has historically allowed homeowners to pass a portion of the cost onto tenants.

“Assuming that happens again, the average cost for a renter would be $16 a year,” Lieberman said.

Silvern said there was “simply no other source of funds” for facilities improvements if the bond fails.

“We did have an allocation of redevelopment funds from the city’s redevelopment agency that basically we no longer have access to which would have funded some public improvements, not academic classroom work, but public improvements that both the campus, students, faculty, and staff and the general public would have been able to share, but even that $57 million we had is now gone as a result of the demise of redevelopment,” he said. “There is simply nothing left. The only hope we have of making a serious improvement to Santa Monica High School in particular is through the use of these funds.”

If Measure ES does pass on Nov. 6, Lyon said the district would move quickly for improvement works to begin, but the process will take time.

“It takes a while, that’s another reason for not wanting to delay it for two years because there is a bit of lag time getting the rating, determining the selling of the bonds, and getting the specs and details on the projects we want to start,” Lyon said. “In order to keep things moving, we’ve got some momentum. I think when the Science and Technology building is finished at Samohi, it’s going to be even more glaringly obvious that the others really need to be upgraded and it will be a great opportunity for us to continue that.”