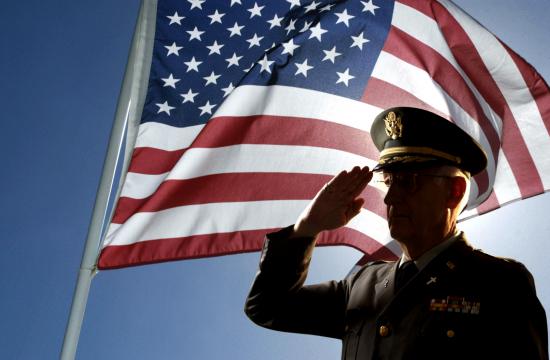 When people think of veterans, they often think of warriors, but Hurricane Sandy offers just the latest reminder of the significant humanitarian and often times life-saving work performed by our veterans on a daily basis.

As Sandy was still wreaking devastation on the east coast, Air Force Reserve and Air National Guard members mobilized on the opposite coast at March Air Reserve Base in California to trek nearly 3,000 miles to assist their fellow Americans.

Memorial Day is appropriately set aside to honor our fallen war veterans — those who made the Supreme Sacrifice for this great country.

Unfortunately, we are unable to personally show our appreciation to these heroes. Veterans Day, however, is intended to honor all of our military veterans, including the nearly 23 million living men and women that are still among us.

Sometimes all that is needed is a simple ‘thank you’ directed at the veteran or the family member for his or her sacrifice.

Part of that sacrifice too often includes unemployment or underemployment when the veteran’s military service is over.

Companies should understand that it’s smart business to hire veterans, and when members of the Guard and Reserves deploy, it is America’s business to ensure that their civilian careers do not suffer.

We must not forget the unique health care needs of women veterans. There are more than 1.2 million women in America today who have worn the uniform. Women play a pivotal role in our mission in Afghanistan. The Department of Veterans Affairs must adequately treat breast and cervical cancer as well as trauma that may have resulted from domestic violence, sexual harassment and assault.

We must always remember those veterans who have given their lives for us long after they stopped wearing their military uniforms. While their service obligations may have expired, their love of country endured .Chances are that if you surveyed your local police or fire department, you would find that a disproportionately high amount of its members are veterans.

Men like Navy veteran and Boston firefighter Paul J. Cahill, who sacrificed his life when a restaurant roof collapsed while he was fighting a fire in West Roxbury on August 29, 2007.

Or Washington State Trooper and U.S. Army veteran Tony Radulescu who was killed on February 23, 2012 when he was shot during a traffic stop in Kitsap County.

When an emergency hits, there is a good chance that it is a veteran that is first to respond. Whether it’s a school teacher, construction worker or first responder, military veterans take their missions seriously.

On September 12 of this year — 11 years and one day after the worst terrorist attack ever inflicted on American soil — two Navy SEAL veterans made the Supreme Sacrifice while protecting their fellow Americans who were under attack at the U.S. Embassy in Benghazi,, Libya.

“I still can’t believe you punched out early on me, but glad to hear from the guys that you fought like a hero — no surprise there. You should know, your efforts resulted in the rescue of over 20 Department of State personnel. They are alive today because of yours and Ty’s heroic action.”

Tyrone Woods was described by his mother as a “stellar SEAL who thrived on adrenaline, excitement and danger.”

In addition to his grieving mother, Ty is survived by his wife, an infant daughter, two teenage sons and countless friends.

And it’s important to remember not only the price that is paid by so many veterans to maintain our freedom – but the price paid by their heartbroken families as well.

Journalist Abigail Pesta, who is the sister of Glen Doherty, wrote, “Today we held his funeral in his hometown of Winchester. During the procession from the funeral home to the church, the streets were lined with hundreds of people. Schools were let out; there were bands playing… People were holding signs. We have seen such a show of support – from both the town that we grew up in and the nation that we live in. We feel so much love.”

Scenes similar to what occurred in Winchester, Massachusetts have taken place in many other cities and towns across America. We revere these heroes because they revered us –their families, their neighbors, their fellow citizens. A country is only as good as the people in it. And a land that could produce such heroes is truly a land worth serving.

While fewer than 10 percent of Americans can claim the honorable title “U.S. military veteran,” this special group often provides the vital services that enable our communities to function.

We must heed the words of our first Commander-in-Chief, General George Washington who said in 1798, “The willingness with which our young people will fight in any war, no matter how justified, shall be directly proportional as to how they perceive the veterans of earlier wars were treated and appreciated by their country.”

James E. Kout is national commander of The American Legion, the nation’s largest organization of wartime veterans with 2.4 million members.