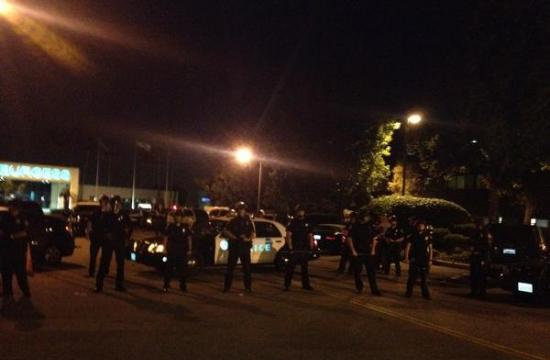 Santa Monica Police Department Sgt. Richard Lewis said its officers were assigned to the MTV event, but when numbers started to grow out of control soon after the event started at 8:30 p.m., additional resources were called upon.

“We started with dispersing crowds that were gathered outside waiting to get in and stop the subsequent patrons who were continuing to try to come to the location,” Lewis said. “When that started happening, several individuals started hopping the airport fences at different locations to get to the hangar where the party was ongoing. That forced us to ask for assistance from other agencies to help lock down the area.”

Lewis said the decision was made to shut down the event at about 10:30 p.m.

“We closed down the entire event and two people were arrested for public intoxication,” Lewis said. “A radio station gave away 600 tickets, another 600 were sold, and we understood there would be 100 VIP. That would be 1300, but we had over 2000 in line after there was already about 700 inside and people were still arriving.”

Lewis said all crowds had been cleared and dispersed by 11:30 p.m. He said the event was scheduled to midnight.

“Turnout for the concert far exceeded the 1,000 capacity for the venue. Prior to turning fans away, officers of the Santa Monica Police Department called in backup to help manage the crowd. At approximately 11 p.m., organizers considered it best to end the event earlier than scheduled. Fans filed out in an orderly fashion and no one was hurt. MTV Iggy thanks the fans who showed up for the performance and regrets any inconvenience caused by its early end.”