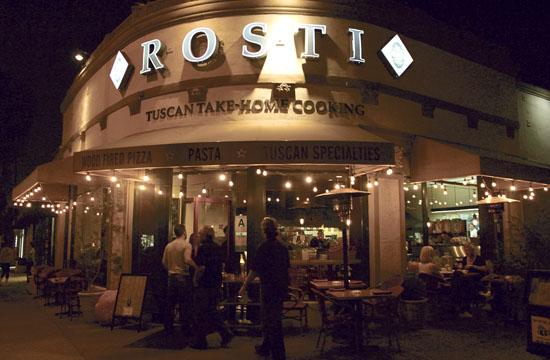 Rosti Tuscan Kitchen has been a mainstay on Montana Avenue since opening 20 years ago, but its décor and food has undergone major changes and re-branding since Kevin Goldfein bought the restaurant in June 2008.

In just eight days in April 2010, Goldfein remodeled the inside and out of the restaurant, re-launched the menu, and changed the colors, logos, and uniforms to reposition Rosti for the future.

As owner, Golfein has continued his focus of being an integral part of the community through his neighborhood restaurant.

In 2011, he won the National Restaurant Association’s “Restaurant Neighbor of the Year” award for California.

He has supported multiple programs, groups, and organizations in the community including local schools, libraries, lifeguards, Little League teams, Planned Parenthood, and many others.

“One of our most proud moments was being part of Project Lemonade in 2011 when Rosti was a major part of the efforts to save 20 teachers jobs and raise over $2 million,” Golfein said.

He said his staff embrace a community first attitude that can be seen in their service, which he said is always fast, friendly, honest, and sincere.

“We have a few mottos here at Rosti and one of them is that we are always on the customer’s side,” he said. “Want to alter an item on the menu for your liking? No problem. Want a gluten free, vegetarian, or vegan menu? We have them. Want to know which pizza is a better choice to order? Our servers can tell you the differences.”

For any first time diners, it doesn’t take long to notice that Rosti’s food and service are second to none.

From delicious salads, soups, and sandwiches to pastas and pizzas in its wood-fired oven, the Italian food is truly authentic.

Golfein described his menu as informal Italian with a Tuscan flair.

“Tuscan cuisine is a lot like Californian cuisine: light, ingredient driven, and heart healthy,” he said. “Sauces do not dominate. Meats are roasted with herbs for flavor. Pastas are light, sauces are home-made, our pizzas are thin, and come directly out of our wood-fired oven.”

The wood-fired oven is used for other dishes too, like the Fire Roasted Artichoke.

“It is first boiled in water with some herbs and seasoning, and then left to cool,” he said. “We then take the artichoke and put it in the wood-fired oven and put our special blend of tuscan herbs on it which is rosemary, sage, fresh garlic, sea salt, and black pepper. We do a grilled lemon with it and serve it with a side sauce of basil herb vinaigrette which has tarragon it.”

One of the starters on this menu is the Autumn Salad with mixed field greens, endive lettuces, roasted butternut squash, sliced apple, gorgonzola cheese, toasted pumpkin seeds, and balsamic Vinaigrette.

There are five entrees on this special menu, which includes the Drunken Shrimp Linguini with sautéed jumbo shrimp scampi on top of linguini in a vodka pink sauce. Another warm winter wonder is the Butternut Squash Ravioli topped with either buttery sage sauce with toasted hazelnuts or creamy sage and gorgonzola sauce.

For a meal that’s a little bit heartier, try the Tuscan Beef Stew. It features Rosti’s classic seasonal stew of beef and winter vegetables seasoned with Tuscan herbs, and served with mashed potatoes.

On the regular menu, Goldfein encourages first-time diners to try its signature Pollo Al Mattone chicken dish that has been on the menu since Rosti opened 20 years ago.

He said it is prepared in a traditional and unique way.

“We split the chicken in half and overnight we put a rub on it with Tuscan herbs of rosemary, sage, garlic, salt and pepper,” he said. “We use an oven brick on top of it for 45 minutes, which is imported from Italy. It puts weight on the chicken and it makes the skin really crispy. All those fresh herbs go into the skin and into the flavor of the chicken. It’s the traditional way to do it in Italy and we preserve that here at Rosti.”

The restaurant has its own parking lot behind the restaurant. Pick-up and delivery orders are available for lunch and dinner every day of the week.