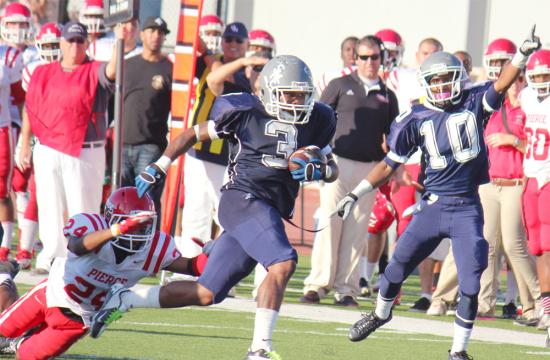 It was the near the end of the third quarter and Santa Monica College (8-1) was down 40-14 against L.A. Pierce (7-2) with a fourth quarter comeback looking nearly impossible.

In order to win, Santa Monica College would not only have to shut down the offensive juggernaut of L.A. Pierce, but they would have to score five touchdowns in a game where the Brahmas defense had only allowed the Corsairs to score 14.

The Santa Monica College Corsairs did just that and won the game 50-47 at home on the Corsair Field Saturday afternoon remaining undefeated in the Pacific Conference at 6-0.

“It was amazing,” said Lindheim. “Pierce is so talented and so dynamic and I have so much respect for what they do. I knew this was going to be a hard fought game but I still felt good about our chances.”

Santa Monica College quarterback Alfonso Medina led the comeback with 3:28 left in the third quarter scoring on a three play 73-yard drive that was capped by a four-yard rushing touchdown by Corsairs running back Aaron Jones to make the game 40-21.

On the Corsairs next possession, Medina went to the air again leading the Corsairs on a four play 52-yard drive this time finding Ralph Gordon II open for a 21-yard touchdown to make the game 40-28.

But in the forth quarter, the Brahmas offense struck back with quarterback Nick Arbuckle connecting with T. Stone Davis on a 17-yard pass to put the game at 47-28.

It was then that the Corsairs defense stepped up its game and shut down the Brahmas that led to tight-end Dominique Bierria’s 13-yard touchdown on the Corsairs next possession to put the game at 47-35 with 12:47 left to play in the fourth quarter.

On the Corsairs next possession, Gordon caught a 25-yard pass from Medina to up the Corsairs score to 47-42 with 6:14 left in the fourth quarter.

The defense of the Santa Monica College stepped up again with Corsairs defensive back Qujuan Floyd intercepting Arbuckle’s pass.

The game culminated when Jones caught a swing pass from Medina and raced down the sidelines to score a 37-yard touchdown, his second of the afternoon.

Medina then connected with wide receiver Reggie Mitchell for the two-point conversion to put the game away 50-47 with 2:19 left to play and from there the Corsairs defense held strong for the victory.

Medina, who was 22-38 passing for 399 yards and six touchdowns in the game, was just as impressed as Lindheim with the victory.

“In the end, we came together and did what we needed to do and we came out with the win,” Medina said.

Next game for the Corsairs is away against Antelope Valley (7-2) Saturday, Nov. 10 at 7pm.