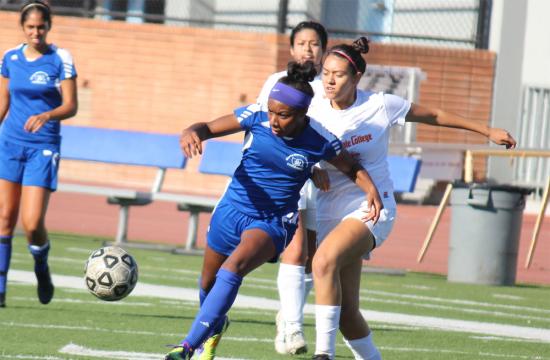 At the end of the first half the score between Santa Monica College and Glendale College was 0-0, but in the second half Tylor Fields starting a scoring spree that ended with the Corsairs kicking in four goals to shut out the Vaqueros 4-0 at home Tuesday afternoon.

Corsairs Head Soccer Coach Aaron Benditson thought that the Corsairs were the dominant team throughout the game but were unable to score goals until the second half of play.

“Sometimes in soccer it’s tough and it’s not easy to score goals,” said Benditson. “We needed to get that first goal to really break them, and after we got that first goal we were able to get some more chances and get some confidence.”

Santa Monica College forward Meg Pierce then scored a goal to put the Corsairs up 3-0 with 26 minutes left to play.

The Corsairs kept up their attack keeping the Vaqueros on defense until the final moments of the game with Santa Monica College defender Susie Scribner tacking on the final goal to set the score at 4-0.

Fields was motivated to score in the second half after her teammates told her that they would go get dinner after the game if she scored.

“I was like, yeah dinner,” said Fields. “So I just went out there and did it for the team because my coach said after one goal the whole team would follow. After the goal, I felt like everyone was motivated and saw that we could do it.”

Next game for the Corsairs is home against L.A. Valley College Friday, Nov. 9 at 3 P.M.